2nd International Yoga Day to be celebrated on 21 June, 2016 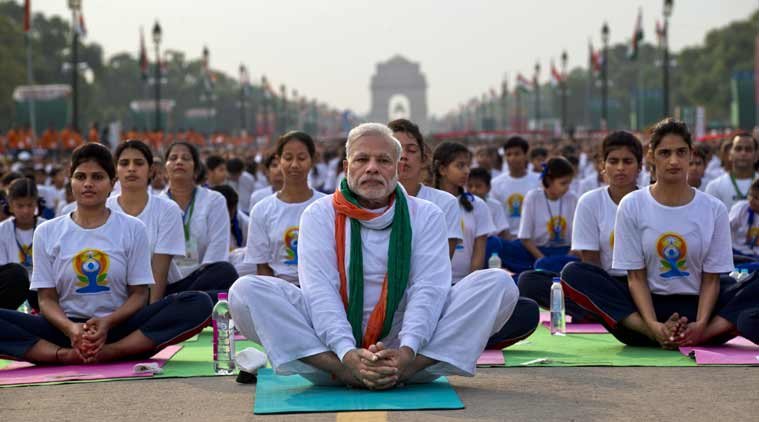 Yoga is a 5,000 years old practice of body, mind and soul. Being originated in India with the aim to transform one’s body and mind, this philosophical tradition of the Hindus has gained prominence. It is a precious gift to mankind from the ancient Indian tradition. It teaches to control human mind, body, thoughts and actions, harmonizing between man and nature. Therefore, it is considered as a holistic approach to good health and well-being. Don’t misinterpret Yoga with exercise but it is a process to develop the sense of oneness with nature, world and ourselves.

21 June has been selected to be celebrated as the International Day of Yoga because it is believed that on this day, the first yogi or the Adiyogi turned towards south and looked at the Seven Sages known as the Saptarishis. The Saptarishis were his first disciples who contributed in spreading the science of Yoga in various parts of the world. Therefore this day holds much importance in the history of humanity.

Around 175 nations from all across the world, including China, Canada and USA promotes the resolution. Therefore, this resolution had the highest number of promoters.

Yoga Guru Sri Sri Ravi Shankar, one of the important international Humanitarians also came up with the idea to celebrate World Yoga Day in December 2011. He praised the efforts of Hon’ble Prime Minister of India and Said “It is very difficult for any philosophy, religion or culture to survive without state patronage. Now, official recognition by the UN would further spread the benefit of Yoga to the entire world.”

According to the decision taken on 11 December, 2014 by the United Nation, International Yoga Day was celebrated on 21st June, 2015 for the first time along with the support of about 177 nations. AYUSH, the Ministry of Ayurveda, Yoga & Naturopathy, Unani, Siddha and Homoeopathy, Government of India, which is the Nodal Agency, will organize various activities to celebrate International Yoga Day.

Logo for the International Yoga Day

The logo for the event symbolizes Yoga, which is a holistic move towards health and well-being. The logo with folded hands (yoga posture) means the union of individual and universal Consciousness, harmonizing mind & body along with man & nature.

The brown leaves in the logo symbolize the Earth, whereas the green leaves symbolize Nature and the blue color signifies the Water element. The brightness of the logo represents the Fire element and the Sun signifies the source of energy and inspiration.

The logo contains the words “Yoga for harmony and peace”, which is the ethos of Yoga.

Schedule for the International Day of Yoga

This is an annual celebration which takes place on 21st of June. This year also, it will take place on June 21. This one hour event will begin at 7:00 AM in the morning and will last till 8:00 AM

Hon’ble Prime Minister of India, Narendra Modi said that he would be at Chandigarh to attend the Second International Yoga Day programme. In his radio address, ‘Mann Ki Baat’ he said, “On June 21, International Day of Yoga, I will join a programme in Chandigarh to practice yoga with them.”

He said that prevention is better than cure. Therefore, practicing Yoga will keep diseases at bay.

Sadhguru Jaggi Vasudev, the spiritual leader and founder of Isha Foundation is going to lead a yoga session, in the 2nd International Yoga Day, going to be held at the UN, on 21 June 2016. This year, the focus will be on Yoga’s theme to attain Sustainable Development Goals.

India being the origin of Yoga provides ample opportunities to be a part of this holistic approach for well-being in many tranquil and enchanting destinations. There are many Yoga centers throughout India. K Pattabhi Jois Ashtanga Yoga Institute (Mysore), Himalayan Iyengar Yoga Center, Dharamkot (HP) & Arambol (Goa), Ramamani Iyengar Memorial Yoga Institute (Pune) and Sivananda Ashrams are some of the best Yoga centers of India that Travelogy India recommends you to visit this year. We provide easy and hassle free bookings of tickets and comfortable accommodations anywhere in India for the travelers coming from different parts of the world to be a part of 2nd International Day of Yoga.