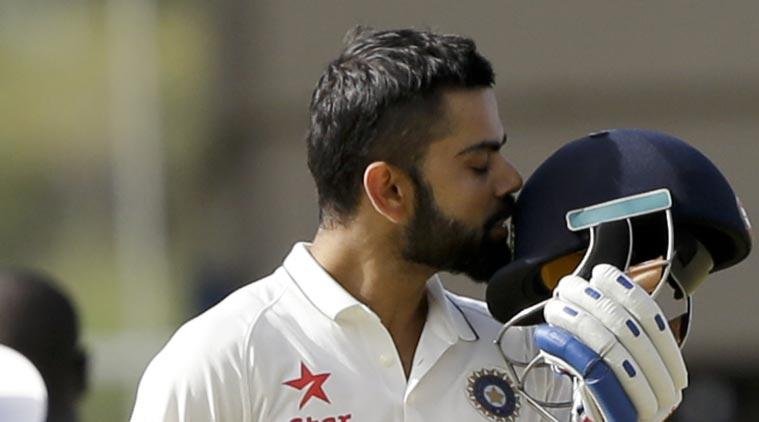 With India declaring post tea, pacer Mohammad Shami, who is back in action after a long layoff, removed Rajendra Chandrika to reduce the West Indies to 31 for one in 16 overs. The hosts trail India by 535 runs going into day three at the Sir Vivian Richards Stadium.

It was memorable day for captain Kohli (200 off 283) balls), who eased to his maiden double hundred in Tests before Ashwin (113 off 253) struck his third Test ton to ensure it was another tough day for the ordinary West Indies bowling attack. A sloppy effort in the field also made matters worse for the home team.

India, who began the day at 302 for four, were allowed to score freely by the West Indies bowlers, so much so that tail-ender Amit Mishra raced to 53 off 68 balls towards the end of the innings lasting 161.5 overs.

The visitors continued to bat on after being placed at 512/6 at tea, and Ashwin came out again with Mishra. While the former was accounted for Kraigg Brathwaite, the latter carried on to play some attacking strokes and reached his 4th Test half-century off 67 balls.

Mishra was out immediately afterwards, holing out to midwicket off Brathwaite again, as the innings was declared closed in the 162nd over. Shami was the unbeaten batsman on 17, and he made good use of being dropped twice to strike some lusty blows.

Thereafter, the West Indies’ openers nearly saw out the testing overs before close of play. Both Chandrika (16) and Kraigg Brathwaite (11*) didn’t seem to be looking for runs, and instead decided to play for time, leaving as many deliveries as possible. Just as they looked set to finish the day without loss, Shami managed to induce an edge off Chandrika, who was caught behind.

Earlier, Ashwin put on 71 runs with Wriddhiman Saha (40 runs) in the post-lunch session. Their stand came after Kohli had scored his maiden Test double hundred to put his side in command.

The Indian captain was perhaps looking to bat longer after the lunch break, but didn’t last long as Shannon Gabriel (2-65) finally broke the 168-run stand with Ashwin. Kohli played onto his stumps off the second ball of the second session, and was dismissed for an exact 200 runs with his knock comprising 24 fours.

Saha then joined Ashwin and the two continued to frustrate the West Indies’ bowling. At the same time, the hosts didn’t show much intention to get into the Indian tail, perhaps resigned to the fact that the only end to their time in the field was a declaration.

Saha started off slow but quickly gained momentum as Roston Chase (0-102) and Kraigg Brathwaite (3-65) were brought on in tandem. The runs came off easily, and they brought up the 450-mark in the 139th over. Their 50-stand came off 120 balls, after which Saha was stumped off Brathwaite, going for an expansive drive.

Ashwin soldiered on though, and reached his third Test century off 237 balls. Co-incidentally all his three Test hundreds has come against the West Indies. Meanwhile, the 500-mark came up in the 151st over as the visitors looked set for a tall score.

Kohli had scored his maiden Test double hundred in the morning session and in doing so, became the first Indian skipper to scored a Test doubled hundred overseas. He beat Mohammad Azharduddin’s long-standing record of 192 against New Zealand scored in February 1990. Also, Kohli recorded his highest First-Class total going past 197 runs.

India had started off the day at their overnight score of 302/4, with the two batsmen looking to bat as long as possible. And it was obvious from their watchful demeanour, as the West Indies had opted for the new ball straightaway.

Gabriel and Jason Holder then started off the proceedings, as on day one, but the pitch seemed to have eased out considerably as compared to the first morning.

Gabriel though was still impressive, and worked up his pace every over. He troubled Ashwin and got him driving, inducing a couple edges that fell short of the slip cordon. Then he induced another edge in the 98th over of the innings -and the 8th of the morning – only for keeper Shane Dowrich to put down a regulation chance. Ashwin was on 43* at that time.

Kohli continued his march without any discomfort at all. First up, he crossed the 150-mark off 208 balls as the 100-partnership came up in the 96th over. Then he went past his previous Test highest score of 169 scored against Australia at the MCG in December 2014.

The duo had scored at a good rate and the first hour of play resulted in 50 runs. There was a short spell when Devendra Bishoo (3-163) was introduced into the attack, wherein the runs calmed down. But as soon as the two batsmen got accustomed to his spin again, the scoring rate went up once again.

Ashwin made good of the life given to him and reached his 7th Test fifty off 127 balls. In doing so, he helped India past the 400-mark in the 118th over and indeed brought up the 150-partnership with Kohli off 272 balls. The West Indies were looking lethargic in the field as this partnership sucked out all energy, even as the wait was now for Kohli’s impending milestone. And he didn’t disappoint, getting there just before lunch, in the 119th over.