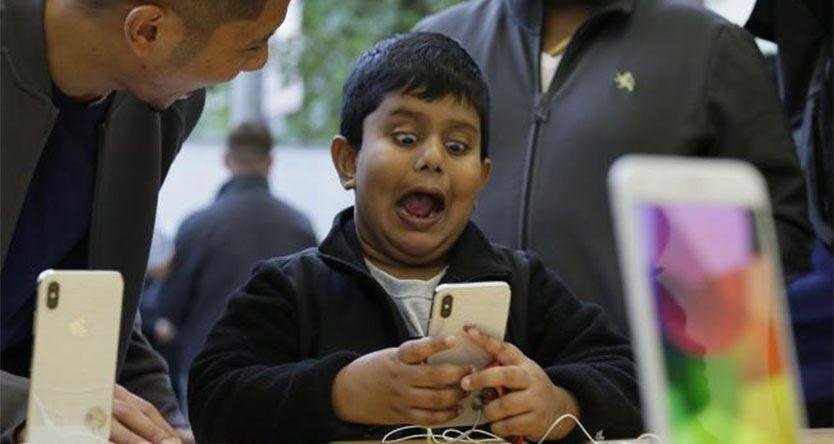 APPLE says there’s only a one in a million chance of its new Face ID technology being tricked. This kid must be the one.

IT TURNS out Apple’s Face ID is far from perfect, as demonstrated by a 10-year-old boy who is the latest to “hack” the sophisticated technology.

How did he do it?

Ammar Malik was able to break into his mum’s new smartphone by simply looking at it, according to Wired.

Which evidently is a problem because the little devil likes reading his parents’ text messages.

“My wife and I text all the time and there might be something we don’t want him to see,” Attaullah Malik, the boy’s father, said. “Now my wife has to delete her texts when there’s something she doesn’t want Ammar to look at.”

The boy did lose his ability to unlock the phone after his mom re-registered the Face ID feature. However, he had more luck after Wired asked her to re-register the device in the same lowlight conditions as the first time she set it up.

“I set up the Face ID using my face but the annoying thing is my 10-year-old son can unlock my phone using his face,” she said in a video demonstration posted to YouTube.

When Apple announced it was getting rid of Touch ID for facial recognition, the company said it was a more secure option with only a one in 1 million chance of being tricked.

“If you happen to have an evil twin, you need to protect your data with a passcode,” marketing vice president Phil Schiller joked during Apple’s iPhone X announcement.

Earlier this week security researchers at Bkav managed to hack the Face ID technology by using a 3D printed frame, makeup, a silicone nose and 2D images, along with special processing on the cheeks and around the face where there are large areas of skin.

“It means the recognition mechanism is not as strict as you think, Apple seems to rely too much on Face ID’s AI. We just need a half face to create the mask. It was even simpler than we ourselves had thought,” they said.

The researchers claimed the entire mask used to trick Face ID cost less than $A200 to create.

It was a particularly elaborate exercise to test the new iPhone’s technology which your average person is very unlikely to replicate, but the case of Ammar Malik shows it’s still far from perfect.