Yuvraj Singh and Hazel Keech get engaged in Bali, wedding next year? 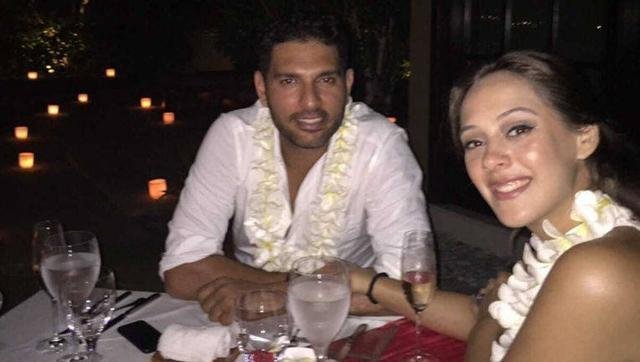 We sure did know that India’s hot in the cricket market after the victory against South Africa, but little did we know that Indian cricketers are now going off the bachelors’ market, and at swift speed. After Bhajji, it’s Yuvraj Singh now! The 33-year-old cricketer got engaged to actor Hazel Keech in a private ceremony in Bali on Wednesday.

A source close to the actor confirms the news, saying, “We are happy to confirm that Yuvraj and Hazel have got engaged.” The couple had been keeping their relationship under wraps.

“I was introduced to her by Yuvraj and she is a very nice girl. I am confident that marrying her will change his fortunes and he will return to the national squad,” Yograj Singh, Yuvraj’s father said in an interview to Mail Today.

Hazel, who is a British actor and model, started her film career with Tamil film Billa (2007) and entered Bollywood with Salman Khan-starrer Bodyguard (2011). The 28-year-old later participated in the reality show Bigg Boss in 2013, but was soon voted out.

Yuvraj, who had made headlines for dating many Bollywood actors previously, hinted towards his engagement during a conversation with cricketer Harbhajan Singh, who married actor Geeta Basra last month.

On being congratulated by Yuvraj, Harbhajan tweeted, “@YUVSTRONG12 u should also come in a line and play straight now. No cut pull.” Yuvraj responded and said, “Yes Mr. Harbhajan Singh from Diwali onwards I’m going to play straight.”

Television actor Ratan Rajput, who participated with Hazel in the reality show, says, “This is wonderful news. She did not stay in the house for a long time but she’s a lovely girl and I’m so happy for her.”

Wrestler Sangram Singh, who also participated in the same reality show, is pleasantly surprised. “I’ve met Hazel so many times, but she did not talk about her relationship. Both Yuvraj and Hazel hid their relationship very well,” says Sangram.