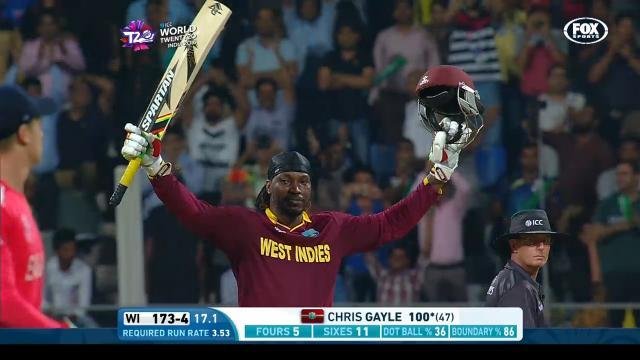 Gayle, who completed his century off 47 balls, remained unbeaten on 100 off 48 balls with five fours and 11 towering sixes to better his own record of a 50-ball hundred in the 2007 tournament in South Africa.

Apart from breaking the tournament’s fastest century record, Gayle now holds the record for most sixes in a World T20 innings (11, joining his 50-over World Cup record of 16) and the most sixes in international Twenty20 cricket (98, beating Brendon McCullum’s 91).

Marlon Samuels set the tone by hitting eight fours in his 37 before Gayle’s brutal hitting took West Indies to 4-183 in 18.1 overs in reply to what earlier appeared to be a competitive England total of 6-182.

England’s seamers found it difficult to control the wet ball because of dew at the Wankhede Stadium as Gayle completed his half-century off 27 balls, smashing three fours and five sixes.

“The dew played a part as well,” Gayle said. “After facing the first over, I took a while to get back on strike. But Marlon helped ease the pressure.”

The left-hander required only another 20 deliveries to complete his century and smashed six more sixes and two boundaries that included three successive sixes off off-spinner Moeen Ali.

“Before I went out, Sulieman Benn said ‘entertain me’,” Gayle said. “Pleased to finish the game and not leave it to anyone else. I was pumped today.”

West Indies never stayed behind the asking run-rate of over nine an over and England’s bowlers had no answer to the barrage of runs off Gayle’s bat.

After losing Samuels in the seventh over, Gayle waited for the loose deliveries to punish England’s bowlers. Such was Gayle’s domination that Andre Russell remained unbeaten on 16 in the unbroken fifth-wicket stand of 70 runs with the opener.

“We were quite happy at halfway, at no stage did England get away,” West Indies captain Darren Sammy said. “We have belief among ourselves in this format. We will go out and try to entertain.”

Earlier, Joe Root top-scored with 48 off 36 balls with three fours and a six after England were put in to bat. Root featured in a productive 55-run second wicket stand with Alex Hales, who made 28 which featured three successive boundaries off leg-spinner Samuel Badree.

Jos Buttler and captain Eoin Morgan took charge late in the innings after Root was caught at mid-off in the 15th over, giving Russell his second wicket.

Buttler smashed three sixes in a brief cameo of 30 runs before he holed out in the deep but Morgan remained unbeaten on 27 off 14 balls as England scored 59 runs in the last five overs.

“We never really took the game away from them,” Morgan said. “Gayle is a hard guy to stop and West Indies didn’t allow us to get going on what was a really good batting surface.”