With Chennai Airport Shut Till Sunday, Navy Base to be Used for Commercial Flights 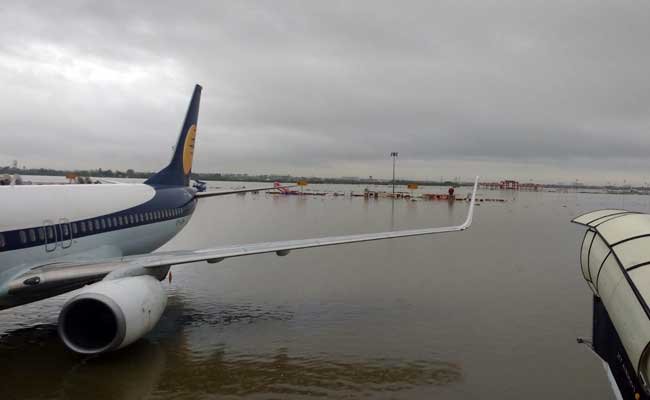 With the Chennai airport shut for operations till Sunday, December 6, the Rajali Naval air station near Arakonam, about 70 km from the Tamil Nadu capital, will be converted into a make-shift airport for commercial flights.

National carrier Air India test-landed an Airbus 320 that flew in from Hyderabad at the Navy base a little before 9 pm on Wednesday. “We are hopeful of passenger flights landing there from tomorrow,” Press Trust of India quoted Defence Ministry sources as saying.

No flight has taken off or landed at the Chennai airport since Tuesday evening, with water on the runway as the city remains flooded due to heavy rain.

“By 6 am today, the situation had deteriorated severely, leading to submerging of entire operational area in approximately seven feet of water. All incoming flights were diverted to alternate airfields, except one international flight which was cleared due medical priority,” said a statement by the government.

“During the closure, 12 domestic and 12 international arrivals were diverted on 1st December 2015. 34 numbers of aircrafts are stranded at the airport. All international and domestic flights to and from Chennai have been cancelled,” it added.

90 passengers who were stranded at the airport have been sent to Bangalore by buses and another 200 have been transferred to the city, the statement said.

The weather department has forecast more rain in the next four days and said that the next 48 hours are critical.

50 trains have also been cancelled, with water flooding rail tracks.

The Chennai airport, said officials, would continue to be affected till the Adyar river is overflowing.

The Chennai Corporation has announced Emergency Contact Numbers for all the regional zones in the city. People can contact the following numbers in case of any emergency due to the floods.