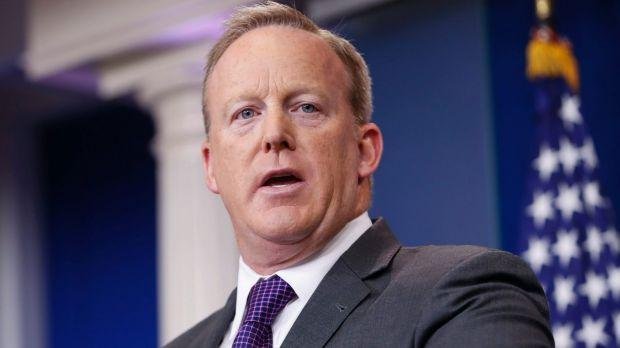 The president requested that Spicer stay on, but Spicer told Trump that he believed the appointment was a major mistake, according to a person with direct knowledge of the exchange.

A spokeswoman for the president, Sarah Huckabee Sanders, was elevated to press secretary. She said Trump is grateful for Spicer’s service and that the president believes Spicer will succeed going forward.

“Just look at his great television ratings,” Trump said in a statement read by Sanders during a White House briefing Friday.

Mr Spicer’s turbulent tenure as the president’s top spokesman was marked by a combative style with the news media that spawned a caricature of him on Saturday Night Live.

His rumoured departure has been one of the longest-running internal sagas in an administration brimming with dissension and intrigue. A former Republican National Committee spokesman and strategist, Spicer was a frequent target of the president’s ire – and correctives – during the first few months of the administration.

The resignation of Spicer was also a blow to the White House chief of staff, Reince Priebus, the former Republican Party chairman who brought Spicer into the West Wing despite scepticism from Trump, who initially questioned his loyalty.

Scaramucci was to meet with Priebus on Friday, according to a West Wing official – and applause could be heard in the second-floor communications hallway when Scaramucci was introduced.

His appointment came two months after the previous communications director, Mike Dubke, stepped down. Trump was frustrated with Priebus over the slow pace of finding a replacement, according to a half-dozen people familiar with the situation.

Trump made the appointment over the objection of Priebus, who thought Scaramucci lacked the requisite organisational or political experience. But the president believed Scaramucci, a ferocious defender of Trump’s on cable television, was best equipped to play the same role in-house, and he offered him a role with far-reaching powers independent of Priebus’.

Spicer flatly rejected the president’s offer of a position subordinate to Scaramucci, according to two administration officials familiar with the exchange.

The appointment of Scaramucci, a favourite of Trump’s earliest campaign supporters, was backed by the president’s daughter Ivanka, his son-in-law and adviser Jared Kushner and Commerce Secretary Wilbur Ross, the officials said.

The dramatic resignation comes after a week in which Trump has moved to shake up his legal team in response to the widening special counsel probe into his campaign’s possible collusion with the Russian government and its impact on the administration’s stalled legislative agenda.

Trump’s longtime personal attorney, Marc Kasowitz, will step back from his central role in the president’s outside legal team with John Dowd, a seasoned Washington attorney with a focus on white-collar crime, now taking the lead in managing the president’s defence. Mark Corallo, a longtime Republican operative who had served as a spokesman for Trump’s legal team, resigned on Thursday.

The president has become agitated by the possibility that special counsel Robert Mueller might begin looking into Trump and his family’s personal finances. In an interview this week with the New York Times, the president issued a warning to Mueller that such a move would be a “violation”.

“Let’s go back to what the purpose of the investigation was: Russian interference in our election,” said White House counsellor Kellyanne Conway, speaking on Fox News. She added, “Where is this going and are Americans comfortable with that — with the taxpayers funding this, with this going off all types of chutes and ladders?”

Trump’s legal team has begun working to undermine the special counsel probe, including investigating ways to highlight conflicts of interest on Mueller’s, The Washington Post reported on Thursday. The president has also inquired about his pardon authority.

After the story was published, one of Trump’s attorneys, Dowd, said it was “not true” and “nonsense”.

The idea that Trump would proactively pardon people involved in the Russia investigation was immediately criticised by the ranking Democrat on the Senate Intelligence Committee, which is also investigating Russian meddling in the election and possible Trump campaign collusion.

“The possibility that the President is considering pardons at this early stage in these ongoing investigations is extremely disturbing,” Democratic Senator said in a statement. “Pardoning any individuals who may have been involved would be crossing a fundamental line.”

The White House has struggled to remain focused on its agenda, amid the constant drumbeat of the Russia investigation. The president himself has only fuelled the Russia frenzy, giving an interview on Wednesday in which he talked extensively about the probe.