What PM Modi Said in His Open Letter to Women

Prime Minister Narendra Modi has written on women across the country on the occasion of Raksha Bandhan — the festival celebrating the ties between brothers and sisters — reiterating his commitment to “protect” them with his government’s social schemes.

The BJP government has been planning to showcase its three key social schemes on Raksha Bandhan, which it plans to celebrate in a big way. PM Modi had taken the lead, urging men in his last radio address, Mann ki Baat, to gift low cost accident and life insurance schemes to their sisters.

In the open letter, which was published in the leading dailies today, the Prime Minister said, “I’m happy to say that people are gifting the Pradhan Mantri Suraksha Bima Yojana in a big way.”

“If India has to be developed, it is essential that 50% of the population be drawn into the decision-making process. The more women are empowered, the more they are included financially, the more progress the nation will make.”

The government has planned to hold a huge fair in Benaras – the Prime Minister’s constituency — on Wednesday, where it plans to enroll 51,000 women under the scheme. The target at the national level is 5 crore. 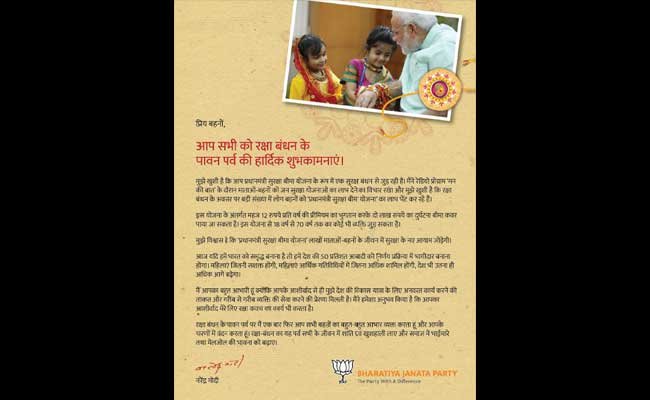 The party has already asked its workers to launch a vigorous campaign across the country to convince men to gift accident and life insurance schemes to their sisters for the festival, which is to be held on Saturday.