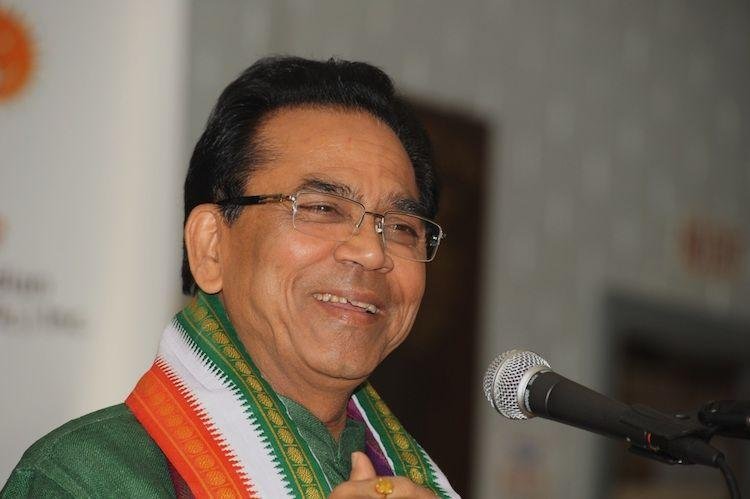 It is a great news that noted Hindi poet, scholar and philosopher Padma Shri Dr Ashok Chakradhar is on a visit to Sydney again.  He is known for comedy and satire in his poetry and is married to Kaka Hathrasi’s niece Bageshri Chakradhar.  Ashok Chakradhar has won many prestigious national awards for literature. He has been actively associated with radio and television and has scripted a number of dramas, satires and poems for children. He has performed in Hindi Kavi Sammelans for several decades. He has represented all classes of society in his poetry. I got an opportunity to meet him and engage in a conversation with him about Hindi and socio-political scenario in India.

Ashok ji, welcome to Sydney. You do magic with words, what do you say about Sydney?

Sydney is a beautiful city with fresh air, plenty of greenery, sunshine, open clear sky and on top of everything my son lives here. I love coming to Sydney and spending some time with him. I came during the light festival of VIVID, loved watching immersive light installations and colourful laser projections on Opera House and Customs House, which reminded me of Holi colours.

People think that Hindi has become old fashioned in modern India and younger generation is not very keen on it. What do you think?

There are two sides of looking at things positive and negative. I am very positive and proud of our younger generation. They speak English very well and have made their place in the international market. We can’t blame our younger generation because most of the books in higher courses e.g. medical science, law etc. are available in English language only. On the other hand, awareness and usage of Hindi has increased in the Southern India in the past few years.

Younger generation is losing interest in Hindi. How can we inspire them?

First of all, I would say the status of Hindi is fairly good nationally and internationally. We have so many Hindi newspapers and TV channels these days. Bollywood films have made a mark in the international film market; we have won many prestigious awards in Hollywood. About 130 universities are offering Hindi internationally.  Yes, I agree that we need to encourage younger people to speak Hindi and it is not one person’s job; we need to work together on it. Good resources and teaching material are required to attract younger people.

Languages are intermingling these days and words from one language are becoming the part of other languages. Many Hindi words have been accepted in English and vice versa. For example, Hindi word ‘Jai Ho’ became the millionth word in the English language.

Technology has impacted all spheres of life. How has it impacted Hindi and Hindi teaching?

Technology is an integral part of today’s life. Hindi font is available on most of the technological devices. We can type and send Hindi messages through our mobile phones. We can prepare, record and deliver Hindi lessons through Youtube. There are various programs to write Hindi on the computer.

How do political parties, especially in power, impact language policy?

Indian government has plan and schemes in place to promote Hindi but when proposals are made, they go through a bureaucratic process of approval. Unfortunately most of these bureaucrats/ IAS officers went to English medium schools, and don’t know Hindi well. Things would be different if these bureaucrats have good knowledge of Hindi and will to do things.  Language policies can be implemented and good teaching resources can be made available to public. On a positive note some Hindi speaking bureaucrats are also there; they take keen interest in Hindi and understand our problems.

Socio-political scenario of India has changed a lot in the past few years, ‘Modi Wave’ and then AAP in Delhi. When we visit India, we feel as far as corruption is concerned, nothing much has changed. Your thoughts please.

I am a positive person and in my opinion, things have improved in India in general. There are so many educational institutions now, shopping malls have opened in each city, multicultural food is available everywhere, hotel industry has theatres, cinemas, saloons everything has improved. Sometimes it feels like we are in a foreign country. We are making progress in all spheres of life e.g. science, space science, technology, Information Technology and literature etc.

Political scenario has always been like this, leaders make promises, which are not fulfilled. Things have improved in Delhi, condition of roads and fly overs has improved. We don’t always need to depend on the bureaucrats and the government officials, we also can bring the social change by changing our attitude, by teaching good moral values to the kids right from the beginning as people do it here in Australia.

What is your message to our readers?

I am very proud of the Indians here. You are working hard in Australia and there is a lot to learn from you all!

In honor of Padmashri Ashok Chakradhar, Consul General of India in Sydney Mr B. Vanlalvawna organized a program at their cultural centre on 14th July. The program was attended by the Hindi lovers of Sydney.