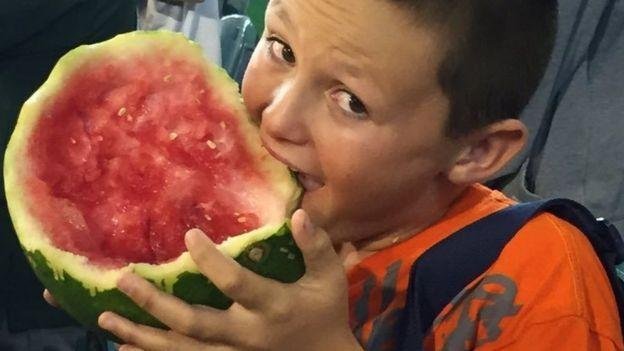 An Australian boy earned cult status among cricket fans after he was filmed eating a whole watermelon – including the rind – in Melbourne.

Mitchell Schibeci, dubbed “watermelon boy”, said he devised the stunt to get his face on the game’s big screen.

Commentators at the Melbourne Cricket Ground (MCG) were shocked to see him chomping into the fruit, skin and all, at Saturday’s game.

The hashtag #watermelonboy trended on social media in Australia.

Mitchell, 10, told the BBC that eating the whole watermelon was tougher than expected.
“It was a lot more hard work than I thought it would be… I just kept on eating and eating it,” he said.

Mitchell said he had been eating watermelon rind since the age of two.

The clip of Mitchell tucking into the watermelon was picked up as ESPN’s Play of the Day, but he hasn’t let the attention go to his head.