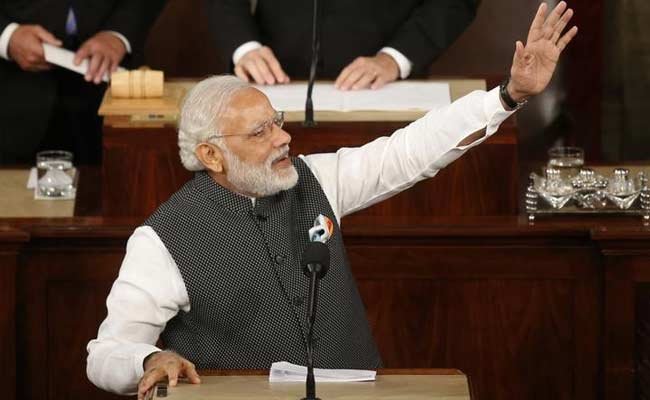 Here are the highlights:

• I am deeply honoured by the invitation to address this Joint Meeting of the U.S. Congress.

• This temple of democracy has encouraged and empowered other democracies the world over. It manifests the spirit of this great nation, which in Abraham Lincoln’s words, “was conceived in liberty and dedicated to the proposition that all men are created equal.”

• Two days ago, I began my visit by going to the Arlington National Cemetery – the final resting place of many brave soldiers of this great land. I honoured their courage and sacrifice for the ideals of freedom and democracy.

• I applaud … India applauds, the great sacrifices of the men and women from ‘The Land of the Free and the Home of the Brave’ in service of mankind. India knows what this means because our soldiers too have fallen in distant battlefields for the same ideals. That is why the threads of freedom and liberty form a strong bond between our two democracies.

• There were many who doubted India when, as a newly independent nation, we reposed our faith in democracy. Indeed, wagers were made on our failure. But, the people of India did not waver.

• Our founders created a modern nation with freedom, democracy, and equality as the essence of its soul. And, in doing so, they ensured that we continued to celebrate our age old diversity.

• Today: across its streets and institutions; in its villages and cities; anchored in equal respect for all faiths; and in the melody of hundreds of its languages and dialects.

• For my government, the Constitution is its real holy book. And, in that holy book, freedom of faith, speech and franchise, and equality of all citizens, regardless of background, are enshrined as fundamental rights.

• Engagement between our democracies has been visible in the manner in which our thinkers impacted one another, and shaped the course of our societies.

• Thoreau’s idea of civil disobedience influenced our political thoughts. And, similarly the call by the great sage of India Swami Vivekananda to embrace humanity was most famously delivered in Chicago.

• Our independence was ignited by the same idealism that fuelled your struggle for freedom. No wonder then that former Prime Minister of India Atal Bihari Vajpayee called India and the U.S. ‘natural allies’. No wonder that the shared ideals and common philosophy of freedom shaped the bedrock of our ties. No wonder then, that President Obama has called our ties the defining partnership of the 21st century.

• More than fifteen years ago, Prime Minister of India, Atal Bihari Vajpayee stood here and gave a call to step out of the ‘shadow of hesitation’ of the past.

• In the fall of 2008, when the Congress passed the India-U.S. Civil Nuclear Cooperation Agreement, it changed the very colours of leaves of our relationship. We thank you for being there when the partnership needed you the most.

• India will never forget the solidarity shown by the U.S. Congress when terrorists from across our border attacked Mumbai in November of 2008.

• The genius of Norman Borlaug brought the Green Revolution and food security to India. The excellence of the American Universities nurtured Institutes of Technology and Management in India.

• In trade, so in Defence, India exercises with the United States more than we do with any other partner. Defence purchases have moved from almost zero to ten billion dollars in less than a decade.

• Our cooperation also secures our cities and citizens from terrorists, and protects our critical infrastructure from cyber threats.

• Civil Nuclear Cooperation, as I told President Obama yesterday, is a reality.

• SIRI tells us that India’s ancient heritage of Yoga has over 30 million practitioners in the U.S. It is estimated that more Americans bend for yoga than to throw a curve ball. And, no Mr. Speaker, we have not yet claimed intellectual property right on Yoga.

• Connecting our two nations is also a unique and dynamic bridge of three million Indian Americans. Today, they are among your best CEOs, academics, astronauts, scientists, economists, doctors, even Spelling Bee champions. They are your strength. They are also the pride of India. They symbolize the best of both our societies.

• Our 800 million youth, especially, are particularly impatient. India is undergoing a profound social and economic change. A billion of its citizens are already politically empowered.

• My dream is to economically empower them through many social and economic transformations. And, do so by 2022, the seventy-fifth anniversary of India’s independence.

• My to-do list is long and ambitious. But you will understand. It includes:

– A vibrant rural economy with robust farm sector
– A roof over each head and electricity to all households
– To skill millions of our youth
– Build 100 smart cities
– Have a broad band for a billion, and connect our villages to the digital world
– And create a twenty-first century rail, road and port infrastructure.

• These are not just aspirations; they are goals to be reached in a finite time-frame. And, to be achieved with a light carbon foot print, with greater emphasis on renewables.

• In every sector of India’s forward march, I see the U.S. as an indispensable partner.

• Many of you also believe that a stronger and prosperous India is in America’s strategic interest. Let us work together to convert shared ideals into practical cooperation. There can be no doubt that in advancing this relationship, both nations stand to gain in great measure.

• As the U.S. businesses search for new areas of economic growth, markets for their goods, a pool of skilled resources, and global locations to produce and manufacture, India could be their ideal partner. India’s strong economy, and growth rate of 7.6% per annum, is creating new opportunities for our mutual prosperity.

• A strong India-U.S. partnership can anchor peace, prosperity and stability from Asia to Africa and from Indian Ocean to the Pacific.

• Afghans naturally recognize that the sacrifices of American have helped create a better life. But, your contribution in keeping the region safe and secure is deeply appreciated even beyond. India too has made an enormous contribution and sacrifices to support our friendship with Afghan people.

• A commitment to rebuild a peaceful, and stable and prosperous Afghanistan our shared objective.

• Not just in Afghanistan, but elsewhere in South Asia, and globally, terrorism remains the biggest threat.

• In the territory stretching from West of India’s border to Africa, it may go by different names, from Laskhar-e-Taiba, to Taliban to ISIS. But, its philosophy is common: of hate, murder and violence. Although its shadow is spreading across the world, it is incubated in India’s neighbourhood.

• I commend the members of the U.S. Congress for sending a clear message to those who preach and practice terrorism for political gains. Refusing to reward them is the first step towards holding them accountable for their actions.

• The fight against terrorism has to be fought at many levels. And, the traditional tools of military, intelligence or diplomacy alone would not be able to win this fight.

• We have both lost civilians and soldiers in combating it. The need of the hour is for us to deepen our security cooperation.

– that isolates those who harbour, support and sponsor terrorists
– that does not distinguish between “good” and “bad” terrorists;
– that delinks religion from terrorism.

• Also, for us to succeed, those who believe in humanity must come together to fight for it as one, and speak against this menace in one voice. Terrorism must be delegitimized.

• Often, India and the U.S. have combined their strengths in science, technology and innovation to help fight hunger, poverty, diseases and illiteracy in different parts of the world.

• The success of our partnership is also opening up new opportunities for learning, security and development from Asia to Africa.

• And, the protection of environment and caring for the planet is central to our shared vision of a just world. For us in India, to live in harmony with mother earth is part of our ancient belief. And, to take from nature only what is most essential is part of our civilizational ethos.

• A strong U.S. support for our initiative to form an International Solar Alliance is one such effort. We are working together not just for a better future for ourselves, but for the whole world. This has also been the goal of our efforts in G-20, East Asia Summit and Climate Change summits.

• The constraints of the past are behind us and foundations of the future are firmly in place. In the lines of Walt Whitman, “The Orchestra have sufficiently tuned their instruments, the baton has given the signal.” And to that, if I might add, “there is a new symphony in play.”