Want freedom within India, not from India: Kanhaiya after release 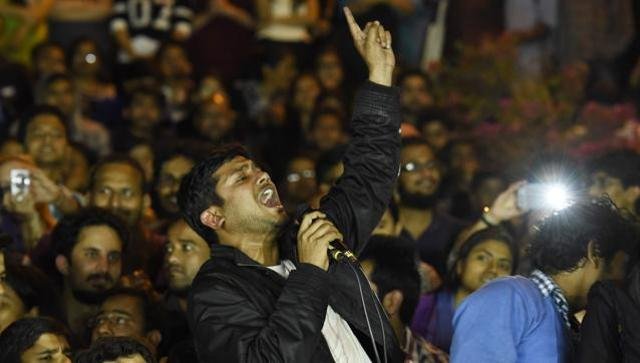 Student leader Kanhaiya Kumar was given a roaring welcome at JNU upon his release from Tihar jail on Thursday — nearly three weeks after he was arrested on a controversial sedition charge — and said he never “asked for freedom from India, but freedom within India”.

Kumar, who returned to the Jawaharlal Nehru University campus amid celebrations by hundreds of students and teachers, took on the Prime Minister, saying “Modiji only says ‘mann ki baat’, but doesn’t listen to it”

As the sprawling university campus was enveloped in darkness after street lights mysteriously went off before Kumar’s return, slogan-shouting students massed in the open holding flaming torches and carrying placards and posters hailing the student leader.

In his speech, which was peppered with quips over his time in jail, Kumar said: “We want ‘azaadi’ from people who are looting the country.”

“I come from a village. Where there are a magic shows. People show magic and sell rings that fulfill all wishes…We have some people like that in our country, who say black money will come back, sabka saath sabka vikas (development for all),” Kumar said in his veiled dig at the Modi-led government.

“We Indians forget too soon but this time the ‘tamasha’ is too big and these ‘jumlas’ won’t be forgotten,” he said to a loud cheer.

Kumar said we wouldn’t comment on the case against him as the matter was in a court of law.

Addressing students at the campus, the 29-year-old said he had many differences with the PM but he agreed with his tweet “Satyameva Jayate”, which he had posted in praise of HRD minister Smriti Irani’s speech in Lok Sabha on the JNU row.

The February 12 arrest of Kumar, the first president of the JNU Students Union from the CPI-affiliated AISF, was widely denounced, more so after he was beaten up in a Delhi court on two days by some lawyers.

Kumar said he had no ill feelings towards anyone and won’t indulge in a “witch-hunt” towards the ABVP. “There is no animosity towards ABVP because we are democratic. We see them as our opposition,” he said.

“Let me just say it is not easy to get admission in JNU neither it is easy to silence those in JNU,” he added. He said his arrest is a planned attack on JNU.

“This attack is to delegitimise the UGC protests, to prevent justice to Rohith Vemula(the dalit scholar in Hyderabad who committed suicide,” he said.

Delhi Police kept claiming that they had irrefutable evidence that Kumar had raised anti-national slogans but failed to come up with the evidence in the court, weakening their case.

On Wednesday, the Delhi High Court gave a six-month interim bail to the jailed student leader but made wide-ranging observations on issues such as nationalism and love for the country that were quickly lapped up by the establishment and denounced by legal experts as unwarranted.

During the course of his one hour, six minute-long speech, he also referred to Modi’s narration of an anecdote related to President Nikita Krushchev of erstwhile Soviet Union in the Lok Sabha.

“When he (Modi) was speaking I wanted to tell him to talk about Hitler as well. He should speak about Mussolini as well after all his guru Golwalker (second RSS chief) had met the former… PM talks about mann ki baat but does not listen,” Kumar said in his speech.

“If you speak against the government, their cyber cell will frame you using doctored videos and count the number of condoms in your hostel,” he said.

He also responded to arguments that invoke the martyrs of Indian Army in criticising the JNU students protesting against the government.

“I salute those soldiers dying at the borders. But what about farmers committing suicides in abject poverty? Those farmers are the fathers of majority of those soldiers. My father is a farmer, my brother is a soldier.

Former members of the JNU unit of the ABVP, who resigned recently, were also present among the audience.

“We are all relaxed that Kanhaiya is back but the fight is far from over,” PhD student Priyanka Das told IANS, summing up the general mood in the student community.

“We will maintain the solidarity till Anirban (Bhattacharya) and Umar (Khalid) are back and safe,” she added, referring to the two other student activists who too are in jail on sedition charges.