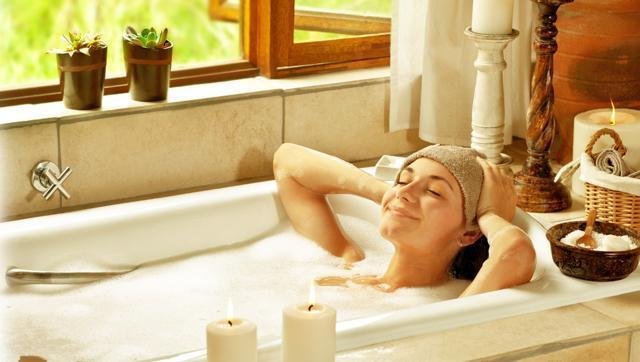 There cannot be better news for those who love to laze around and procrastinate. Now you can burn calories without putting in much effort or exercise. All you need to do is have a hot bath, say researchers who claim that it has similar benefits as a work out.

During vigorous exercise, the body gets hot. The same thing happens while taking a hot bath, researchers said.

Steve Faulkner from Loughborough University in the UK followed 2,300 middle-aged male participants for 20 years on average.

The findings suggest that increased sauna usage reduced the risk of death from stroke or heart attack. This could be because of the increased blood flow and reduced blood pressure that people get when going to a sauna, researchers said.

In a different study, Faulkner recruited a group of participants to test the effects of a hot bath. They were fitted with monitors that recorded levels of blood sugar continuously as well as a rectal thermometre to measure the body’s internal core temperature.

One of metabolic fitness’ important measures is the body’s ability to keep blood sugar levels within a normal range, Faulkner said.

In the first part of the study, participants took an hour-long bath in hot water which had a temperature of 40 degrees Celsius. They were given a light meal after the bath.

The second part of the study was a one-hour cycling session to see how the hot bath’s effects fared with exercise.

The findings showed that taking a long, hot bath burned 140 calories, which is equivalent to a 30-minute brisk walk.

Cycling burned 630 calories on average. While a hot bath did not burn as many calories as exercise, the study showed that it can burn a lot of energy, Faulkner said.

“What we found was that peak glucose was actually quite a bit lower after the bath, around 10% lower compared to exercise,” said Faulkner.

According to him, this could be partly because of the heat shock proteins release.

These proteins are released by the body in response to heat, though the discharge can also be triggered by other stressors such as exercise, inflammation and infection, Faulkner said.