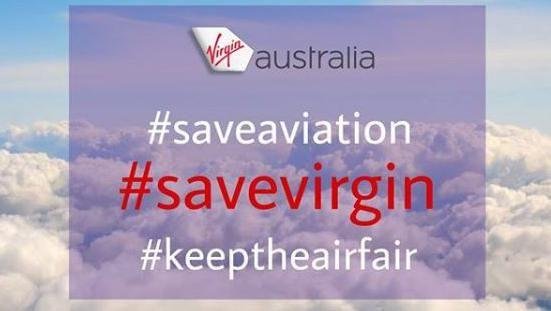 As the news about Virgin Australia going into voluntary administration broke across the world, so did the hearts of the airline’s workers and passengers.

The decision, which was officially announced today, has left thousands of workers hanging in the balance.

Now, many of those workers have taken to social media to express their sadness and share their stories about the airline.

The hashtags #savevirgin and #savevirginaustralia are trending across all social media platforms, as they ask the Government and the public to get behind the cash-strapped airline.

On Facebook, Perth Pilot Keegan Monteiro posted that these were tough times for Virgin Australia and the aviation industry around the world.

“We continue to serve and to smile everyday so let us get together in unity for aviation around the world which I can proudly say Virgin staff do a wonderful job at,” he said.

On Instagram Ange Radford reflected on her past career with the airline and the friendships she made, saying she hoped the airline wasn’t “gone for good.”

Lauren from Queensland shared a photo of her first day with the airline and said the company would grow back their wings because “even when they’re clipped, clipped wings DO grow back and you will understand we are phoenixes in disguise.”

Jess Flood, who says she has been with Virgin Australia for five years, called it the best job in the world.

“Virgin has presented me with so much opportunity and I am so grateful for it all. Business as usual for now and praying we get through this.” she said.

While the company’s Western Australian crew shared this video, to keep their team’s spirits up.

“This is just some of our small family on the west side of Australia. Our wings are our identity. Our wings unite us together and keeps us strong! We’ll get though this!” said Benjamin from Perth.

Even passengers shared their stories and showed support for the airline, including Tim from Brisbane who brought his son home to Australia on a Virgin Australia flight.

“I wanted to share this photo Nic took of Dylan & I on our @virginaustralia flight back to Australia way back in August 2015. We were on VA2 & seated in row 20, & had the row to ourselves. Dylan had been in the world 11 days,” he said.

“I remember being the most nervous I have ever been in my life – nothing has ever come close to that feeling of not knowing if I could handle this gift that had been given to us, not knowing what the future had in store for a family like ours.”

Richard Branson also posted a message for the Virgin Australia team, telling them how proud he was of them and everything the had achieved together.

This is not the end of Virgin Australia, but I believe a new beginning. I promise that we will work day and night to turn this into reality,” he said.

“We will work with Virgin Australia’s administrators and management team, with investors and with government to make this happen and create a stronger business, ready to provide even more value to customers, competition to the market, stimulus to the economy, and as many jobs as possible for our wonderful people.”

Virgin chief executive Paul Scurrah has also declared Virgin Australia will continue to be a major player in the Australian aviation industry – and will fight for its survival – despite going into voluntary administration.