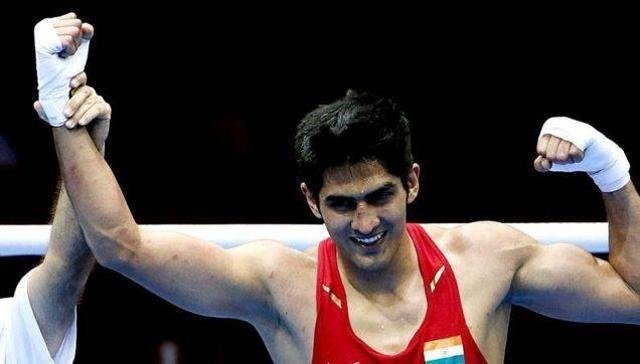 Star Indian boxer Vijender Singh knocked out Dean Gillen of England in the opening round to register his second consecutive victory at the professional level at the National Stadium, Dublin on Saturday.

The bout turned out to be a total mismatch as the Haryana pugilist moved well in the ring, showcasing some nice footwork and putting his opponent under pressure right from the start with powerful punches.

The Englishman was visibly struggling to withstand Vijender’s blows and was sent crashing to the canvas within the first minute when the Indian caught him on the jaw with a straight punch.

Vijender – who entered the ring to loud drum beats, Punjabi music and colourful dancing by a group of bhangra dancers – continued his brutal assault and even knocked over the referee at one point when he mistakenly caught the official with his elbow.

Vijender soon sent Gillen crashing to the ropes for a second time and the Nottingham lad could not recover from the blow as the Indian fans among the sparse crowd in the arena erupted in joy.