‘I Am An Uttar Pradesh-Wala,’ Says PM Modi Flagging Off Poll Battle 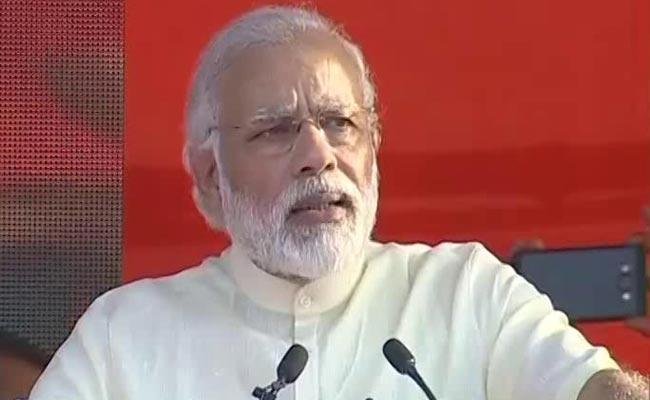 Prime Minister Narendra Modi today signalled the beginning of the mega battle for Uttar Pradesh next year, choosing to address a rally in the state’s Saharanpur to mark his government’s two years in office and focusing his speech on farmers and the poor.

“I am an Uttar Pradesh-wala,” said the Prime Minister, who represents the state’s Varanasi in Parliament. The big crowd chanted “Modi, Modi”, many of them climbing polls to get a better glimpse of the PM, much to the alarm of the police.

Presenting a report of his work in the last two years, the Prime Minister said, “Two years ago no one would have dared to stand amid the people and give an account of their work to them. This UP parliamentarian is giving an account,” and also, “Two years ago, scams were all over the news…Have you heard anyone talk about corruption in the Modi government?”

His work, PM Modi said, was minutely scrutinized and he welcomed it. “If my government does something wrong, it runs on TV for 24 hours. I welcome this close scrutiny of my work. The government should be held accountable for every day, every penny.”

The speech peppered with digs at the opposition Congress, like when he said, “the country is changing, but the mind-set of a few people hasn’t changed”. He also attacked the previous Congress-led UPA government over the many scams that surfaced in its tenure and said, “Two years ago, corruption and loot were all over the news. Were those people in power sent to loot the public?”

PM Modi emphasised how he has made states more powerful and said no scheme of his government is aimed at a particular caste or community for vote-bank politics. “All 125 crore Indians are my family,” the PM said, adding, “only development matters”.

Home Minister Rajnath Singh was unambiguous in his appeal to the voter in Uttar Pradesh, where assembly elections will be held next year. It was time, he said, for the BJP to return to power and “give the state an able, stable and efficient government”.

“We have set ourselves a target of 265+. We will cross it,” BJP vice-president and in-charge of Uttar Pradesh Om Mathur told media.