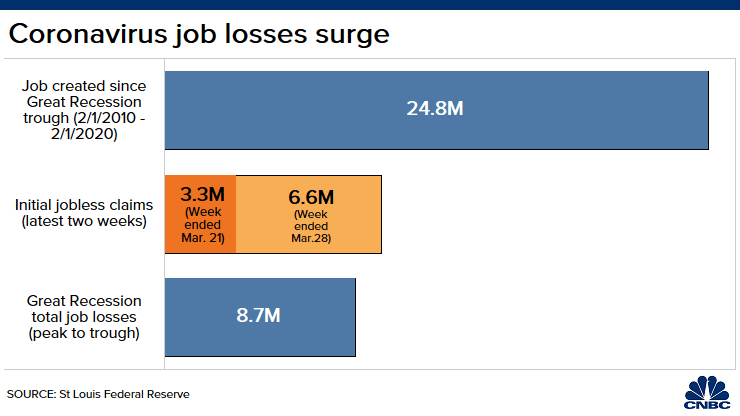 The astounding pace at which Americans filed for unemployment over the past two weeks has wiped out nearly half the total number of jobs added to the economy over the last decade since the financial crisis.

The outbreak of COVID-19 has sent employers scrambling as forced business closures spell a massive hit to revenues and a dire need to again cut costs until the disease passes and governments feel comfortable resuming commerce.

Combined, that means about 10 million Americans filed for unemployment in the final two weeks of March, nearly halving the 24.8 million the U.S. economy added between February 2010 and February 2020.

That 10 million spike in jobless claims also exceeds the 8.7 million claims filed by Americans during the Great Recession from peak to trough.

“This is eye watering and we are still only at the beginning of the layoffs spurred by the lockdowns throughout the country,” Aberdeen Standard economist James McCann said in emailed remarks.

“When we look at all the jobs at direct risk from social distancing policies, and those which could be affected indirectly, the numbers start to get pretty scary,” he added. “Unemployment could well rocket in coming months to more than 10%, comfortably a post-war record.”

Nonfarm payrolls fell to a low of 129.7 million in February 2010 as the U.S. economy felt the brunt of the recession and employers slashed positions in an effort to cut costs and, in some cases, preserve their businesses.

But employers had rebounded since and through the end of February 2020 had added back nearly 25 million jobs to put U.S. nonfarm employment at a record 152.5 million.