US Airlines To Recall Furloughed Staff 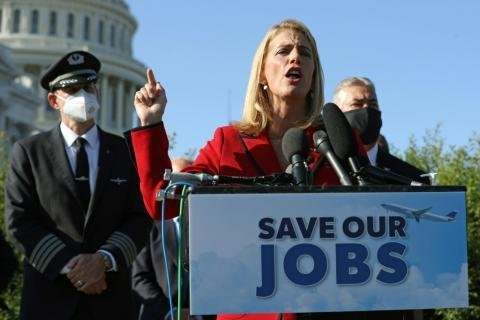 After months of partisan wrangling Congress finally approved the $900 billion stimulus just before midnight, which includes $15 billion in airline worker support payments and requires carriers to recall involuntarily furloughed employees, provide back pay and keep the workers on payroll through March 31, 2021.

Executives at United Airlines, which furloughed 13,000 workers, applauded the package, but described the status of rehired staff as temporary.

“We don’t expect customer demand to change much between now and the end of the first quarter of 2021,” United Chief Executive Scott Kirby and President Brett Hart said in a memo to staff.

“We just don’t see anything in the data that shows a huge difference in bookings over the next few months. That is why we expect the recall will be temporary.”

Airlines have been among the hardest hit sectors in amid the Covid-19 crisis, and the virus has come back with a vengeance undermining hopes of a quick recovery as vaccines are deployed.

In the most recent demonstration of this phenomenon, more than 40 countries have suspended travel from Britain in a bid to contain a fast-spreading new strain of the coronavirus.

US air passengers counts currently run at about 40 percent of those in the year-ago period, according to federal checkpoint data. Airline executives have said they do not expect a full comeback until a vaccine is widely available and implemented.

Sara Nelson, president of the Association of Flight Attendants, who has lobbied for months for the funding, cheered passage on Twitter, saying it shows “what workers can do when we refuse to back down.”

But Nelson said on CNBC that the comments from United about the jobs being temporary were “really inappropriate,” adding that she would continue to fight for the jobs in January after Joe Biden is sworn in as president.

American Airlines, which furloughed 19,000 workers in October, said the funding “will enable us to bring furloughed team members back to work and resume air service to cities and towns that rely on us — all at a critical moment,” according to a statement from American executives.

Southwest said earlier this month it could furlough more than 6,800 workers in March or April in what would be carrier’s first involuntary job cuts in its 50-year history.

A Southwest Airlines spokesman said the carrier was “very encouraged” by the congressional action, but that it had no “updates regarding the potential furloughs in 2021 to share at the moment.”