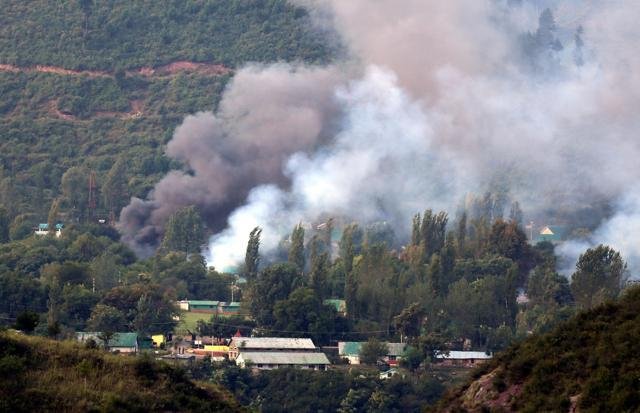 Heavily armed militants attacked an army base in north Kashmir early Sunday and killed 17 soldiers, triggering calls for a swift retaliation that could squeeze the space for any détente between India and Pakistan.

The dawn raid surprised soldiers in their sleep as attackers lobbed grenades and set fire to a building. The blaze killed 12 troopers and the rest died in gunfight, sources added. TV images showed helicopters flying to evacuate the wounded and smoke billowing from the mountainous base at Uri, which houses about 12,000 troops.

Soldiers killed four “fidayeen” – or commando-style gunmen willing to fight to death – after an hours-long gun battle to end what was the worst single attack on the army in years. More than 20 soldiers were wounded, some of them seriously.

The attack jeopardised hopes of peace returning quickly to Kashmir that has been rocked by two months of violent protests in which 86 people have been killed died and thousands injured.

Sources said the raid was part of a fresh wave of infiltration by militants from across the Line of Control, the heavily militarised de-facto border with Pakistan.

A top army official said the attack pointed to the involvement of the Pakistan-based Jaish-e Mohammad, which was also blamed by India for the Pathankot airbase attack in January. Islamabad denied any involvement.

Sunday’s attack led to calls for an aggressive response, with Prime Minister Narendra Modi vowing to punish those behind the “cowardly” and “despicable” attack.

“I assure the nation that those behind this despicable attack will not go unpunished,” Modi said in a series of tweets.

No one has so far claimed responsibility but home minister Rajnath Singh hit out at Pakistan, calling it a terror state that needed to be “identified and isolated”.

“I am deeply disappointed with Pakistan’s continued and direct support to terrorism and terrorist groups,” he tweeted.

Lt Gen Ranbir Singh, director general of military operations, said the militants could be from the JeM as equipment recovered from them had Pakistan markings. He said four AK-47 rifles, four under barrel grenade launchers and ammunition were recovered from the dead militants.

Islamabad rejected the charge with foreign office spokesperson Nafees Zakaria saying that New Delhi always blamed Pakistan for such incidents even before completing a probe.

The attack is likely to further roil Kashmir that army sources say has seen scores of infiltration attempts since protests broke out against insurgent leader Burhan Wani’s killing in July.

The Uri attack came within hours of the Uttarakhand police chief revealing that the Centre had sent out an alert for possible terrorist strike on defence installations in North India.