UAE prince in India, set to give business boost 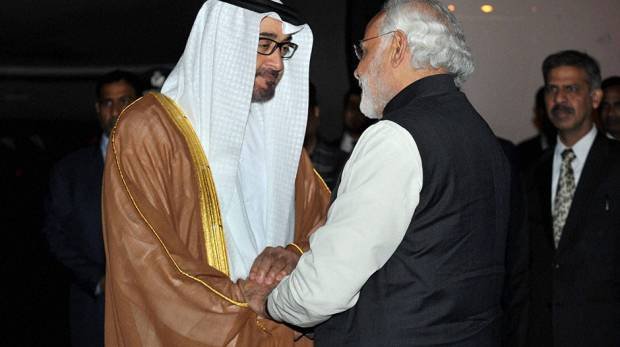 NEW DELHI: In a sign of the importance India attaches to its ties with the UAE, PM Narendra Modi on Wednesday received at the airport Abu Dhabi Crown Prince Sheikh Mohammed Zayed Al Nahyan, who is on a three-day visit to the country.
Al Nahyan will also be hosted by both President Pranab Mukherjee and the PM.
The UAE is already India’s third largest trading partner with an annual trade volume of close to $60 billion. Both countries hope to sign several agreements, including one in civil nuclear energy, which could take the trade volume to over $100 billion in the near future. India is also looking at the Gulf nation, which has a sovereign wealth fund of close to $800 billion, to provide a major thrust to infrastructure development.
Modi had in the past received US President Barack Obama and Japan PM Shinzo Abe at the Delhi airport.
The prince, along with his four brothers, had received PM Modi at the Abu Dhabi airport when he had visited the UAE last August, a favour the Modi returned on Wednesday. The UAE’s $75-billion investment pledge in India and the strong stand it took on crossborder terrorism had turned that visit into one of Modi’s most productive overseas trip.

Al Nahyan, also the deputy supreme commander of UAE armed forces, said UAE was keen to have strong relations with India, especially in light of the significant cooperation opportunities that exist, and “the rapid regional and international changes which call for a greater coordination and understanding between our two countries to face the challenges posed by these changes, as well as the investment opportunities they offer”.
He further said India is an influential regional and international force with an important role in security and stability issues at both regional and international levels. He added that the UAE looks forward to effective Indian contributions to meeting the challenges and risks that face the region and the world, and finding just solutions to the problems, crises and tensions in the Middle East, especially in light of Indian foreign policy which is “distinguished in poise, balance and wisdom, and enjoys wide acceptance regionally and globally”.
Joint production of defence equipment is another key area where both the countries are working hard. Under the initiative, UAE may make investment for manufacturing such equipment in India and get the products’ supply. Strengthening existing cooperation in information-sharing and counter-terrorism will be another focus area in view of the rising threat of Islamic State. UAE has deported about a dozen Indians with suspected links to the terror group. In an interview, the visiting crown prince had warned that India is not immune to the threat from IS.