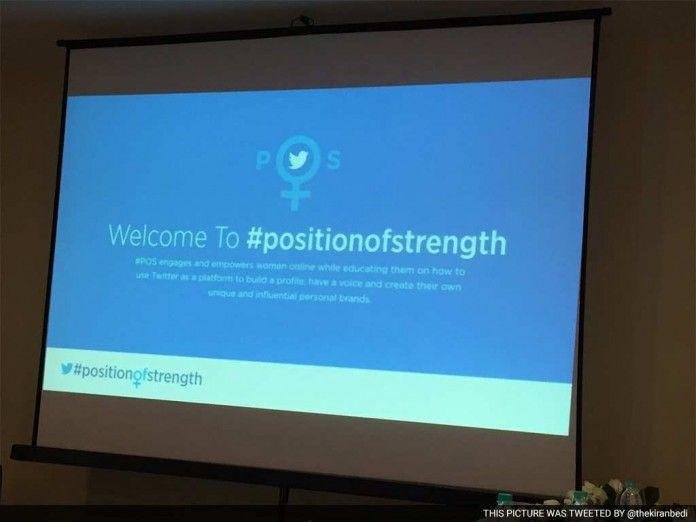 The movement, which has been already been launched in Australia and Ireland, seeks to bridge the gender equality gap online in India and “inspire the next generation of women leaders to have an influential voice in society.”

“We have heard from many women influencers who have used Twitter to drive awareness on gender pay gap, childcare, domestic violence, healthcare and flexible work. With the introduction of #PositionOfStrength, we hope to strengthen the women empowerment movement and encourage women to amplify their voices in a secure and confident manner,” says Mahima Kaul, Public Policy Head, Twitter India.

The social networking platform has partnered with the FICCI Ladies’ Organisation and the Observer Research Foundation to engage more women to find their voices online, communicate safely with confidence and network with other like-minded women and the global community at large.

Safety, according to the organisers, lies at the core of the campaign and enables users to steer clear of any form of online abuse.

“We have introduced measures to empower our users with tools to mute, block and report abusive behaviour,” says Patricia Cartes, Head of Global Trust and Safety Outreach, Twitter.

In order to expand the reach of the programme, a series of round table sessions and workshops with women leaders has been scheduled to be organised throughout the year to discuss how to increase empowerment and safety for women, both online and in the physical world.

Meanwhile, Twitter also launched its Safety Center in Hindi to ensure engagement and education of women locally to enable them to use the platform safely and with confidence.

“For the first time in Asia, we’re pleased to launch Twitter’s Safety Center in Hindi, as we are committed to increasing our safety efforts and rolling out this social movement across this important market,” says Ms Cartes.

- Advertisement -
Share
Facebook
Twitter
Pinterest
WhatsApp
Previous articlePM Modi On The Budget: ‘I Have An Exam Tomorrow And I Am Confident’
Next articleAsia Cup: Virat Kohli Fined For Showing Dissent at Umpire’s Decision During India-Pakistan Game
- Advertisement -