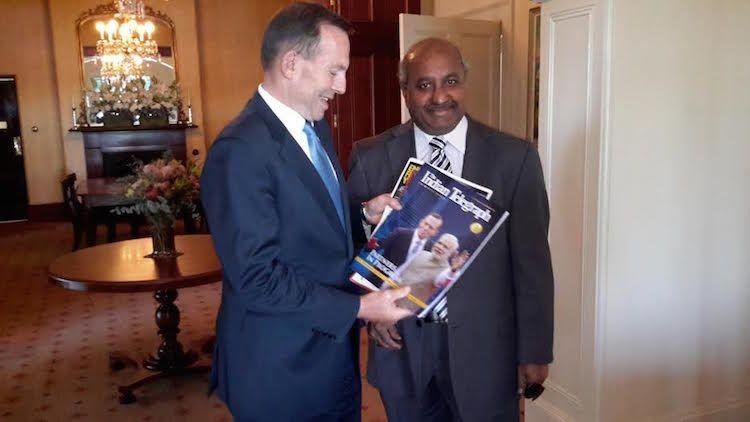 Prime Minister Tony Abbott played perfect host and charmer at an afternoon tea event held recently at Kirribilli House in North Sydney. On August 31, Mr Abbott and his wife Maggie met representatives of the ethic media claiming that the purpose of the event was to celebrate Australia’s multicultural character.

“Australia is a global village in one country. Modern Australia with an indigenous history, an English foundation now has a multicultural character,” stated a beaming Mr Abbott, while enjoying networking with various media personalities.

“This is the people’s house for so many people who represent the diversity of modern Australia. All of us including myself, are migrants or children of migrants. With such a multicultural character of Australia we have the advantage of having insight to the whole world. Every one of you make me very proud. All communities are welcome to Australia so that they can flourish and aspire to any level. Because of this hospitality, many people want to come to Australia and call it their home, where all of us look forward to a great future. Thank you so much,” he said, addressing the attendees.

Senator Concetta Fierravanti-Wells, Parliamentary Secretary to the Attorney-General and to the Minister for Social Services who was also present stated, “Australia is one of the most culturally diverse country with social cohesiveness. The role of ethnic media is very important. You not only report news about Australia, but also ensure people to people connection with your respective communities”.

The event, with no discernable agenda other than networking, was a timely one as recent polls indicate a drop in the Prime Minister’s popularity across mainstream media. If his intent was to woo the ethnic media, Mr Abbott certainly did a good job, graciously accepting a past copy of The Indian Telegraph featuring himself, and the latest print edition.