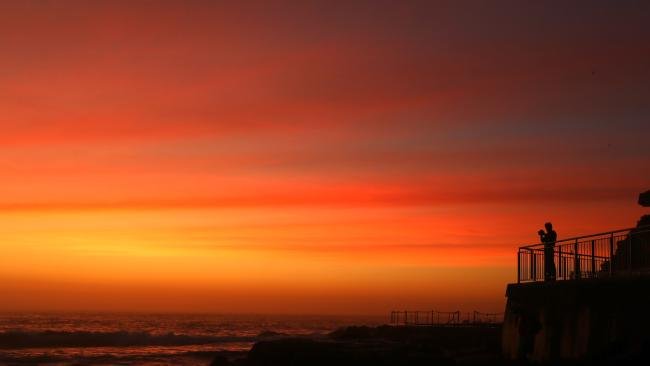 SYDNEYSIDERS sweltered through another steamy night as a record breaking heatwave and soaring humidity levels make for hot and sticky conditions across the city.

It has been a record 21 days since minimum temperatures dropped below 20C and with a slow-moving high pressure system blocking any cool change there is no end in sight.

Air temperatures across the city peaked at balmy 24C before midnight but humidity levels of up to 90 per cent meant that conditions felt closer to 30C.

A Bureau of Meteorology spokeswoman said the high pressure system inching across the Tasman Sea combined with a low pressure trough was to blame for the extended discomfort.

“That high pressure system is stopping any cold fronts coming through and a low pressure trough in the west of the state is drawing moisture down from the tropical parts of Australia,” she said.

“It will stay warm and sticky at night until mid-next week but there is no change on the immediate horizon.”

Hot conditions are expected to continue today as temperatures reach close to 30C in the city and into the mid-30s out west.

Penrith is expected to reach a citywide high of 34C while those looking to escape the sizzling conditions can head to Bondi Beach which is expected to be a relatively mild 25C.

Sydney is forecast to be partly cloudy today with a 20 per cent chance of showers in the far west this afternoon.

Light winds becoming south-easterly 15 to 20km/h in the middle of the day then becoming light in the late afternoon.

Conditions are predicted to remain the same for the rest of the week, cooling slightly over the weekend with increasing chances of rainfall through to midweek.

While the conditions in Sydney are sticky, the city’s residents are actually the most chilled out across Australia with most other major capitals suffering with even worse conditions.

Temperatures in Brisbane, Adelaide and Canberra are predicted to hover around or above 30C for the next week at least with the mercury set to pass 34C on Sunday in Perth and even higher on Monday.

Melburnians had a short respite on Wednesday with highs of just 22C, with the heat to ramp up again to 30C on Friday. Hobart will again buck the trend settling into a run of days into the mid to low twenties.