Health authorities have warned Sydneysiders to be on alert as the baking sun sends temperatures and ozone levels soaring and triggers a total fire ban.

The mercury is expected to tip over 40 degrees in parts of Sydney and ozone levels are predicted to exceed national standards, reaching levels that are likely to have a negative impact on health.

On Tuesday, NSW Health and the Office of Environment and Heritage issued warnings for people with respiratory conditions in response to rising ozone and air pollution levels.

The Rural Fire Service declared a total fire ban in five districts across NSW, including Sydney.

Sydney’s top is expected to reach 38 degrees, potentially the hottest since last January, while some western suburbs are likely to reach 41 degrees, the Bureau of Meteorology said. Even Bondi should reach 37.

High ground level ozone levels triggered on sunny, still days in areas of high air pollution will have Sydney residents with asthma on alert across the city, especially in the west.

Ozone concentrations are predicted to rise above national standards by Tuesday evening, the NSW Office of Environment and Heritage advised. 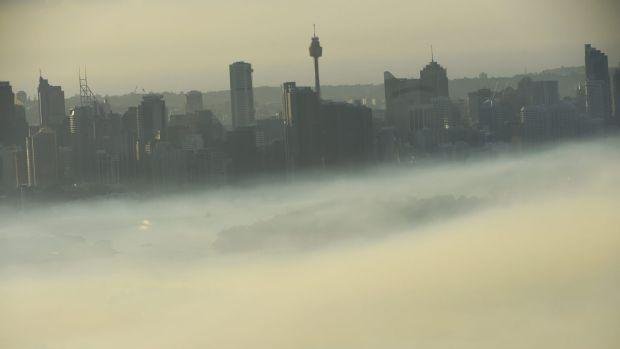 Children with asthma are more susceptible to the effects of ozone pollution and parents should limit the time they play outside, NSW Health warned.

Killara mother Nina Kovich knows how unpredictable and terrifying an asthma attack can be. Her son Finn, now 12, has struggled with asthma since he was just under two years old.

“The worst asthma attack was probably one of his first ones, when he was really little,” Ms Kovich said.

“We were running up the highway trying to get to the doctor because he wasn’t breathing … It was one of the scariest moments of my life, wondering what was happening to him.

“When he has a bad episode he really struggles to breathe properly … his chest is heaving and you can hear the wheeze … it’s almost like a gasping for air,” she said.

“We make sure the doors are closed and try and use the air conditioning to make sure [he doesn’t] overheat,” she said.

Having an asthma action plan was “extremely important” to keep Finn safe – ensuring he has a preventer puffer with him at all times, takes his medication regularly and goes for regular check ups.

NSW Health director of environmental health Ben Scalley said ozone levels reach their peak around 7pm and tend to be lowest in the morning, “so it’s best to plan outdoor play in the morning when the day is cooler”.

The high temperatures forecast particularly across the Sydney basin could push levels to between 105 and 110 pphm on Tuesday and Wednesday.

Sydney’s air quality on Tuesday was “poor”, according to the OEH’s Air Quality Index, which rates air quality as very good, good fair, poor, very poor and hazardous on a scale of zero to 250, with 250 being the worst.

Ozone is composed of the basic oxygen molecule with an additional oxygen atom, making it an unstable, highly reactive gas.

It forms a protective barrier in the Earth’s upper atmosphere, filtering out damaging UV radiation from the sun. But when sunlight and extreme heat on still days combine with hydrocarbon and nitrogen oxide from car exhausts and other air pollutants to form ozone in the atmosphere at ground level, it can have significant negative impacts on health.

It’s the blankets of smog that sits over the city on very sunny, very still Sydney days.

Cities such as Sydney that have long sunny periods, little wind and high temperatures are most likely to experience ground-level ozone.

Motor vehicle exhaust accounts for as much as 50 per cent of the organic chemicals that form ozone. Other sources are oil refining, printing, petrochemicals, lawn mowing, aviation, bushfires and burning off.

“This heat has been building up for quite a while,” said Peter Zmijewski, a senior forecaster at the Bureau of Meteorology said. “We haven’t had anything to cool it.”

The lack of significant cool breaks will likely be repeated on Wednesday when the shift in winds from the north-west to the south-east by the evening will only bring gradual – and short-lived – relief.

“It’s a weak change,” Mr Zmijewski said. “You probably won’t see a huge change [in temperatures] as it moves through.”

Western Sydney would bear the brunt of high ozone levels as emissions across the Sydney basin are blown to the west by a sea breeze and trapped by the mountains, director of climate and atmospheric science at the Office of Environment and Heritage Matthew Riley said.

The regions of Greater Sydney, Greater Hunter, Central Ranges, Southern Slopes and North Western will have the fire ban in place from midnight.

This prohibits the use of fire in the open, including barbecues that use wood, charcoal or heat beads as fuel, and while the ban is in place the penalty for throwing a lit cigarette from a car will double to $1320.

A “severe” bushfire danger rating has been issued for the Greater Hunter for Wednesday, for regions including Lake Macquarie, Newcastle, Port Stephens and the Upper Hunter.

All other regions where the total fire ban is in place will have a “very high” bushfire danger.

On Monday, the Rural Fire Service also warned about grass fires, which can burn three times as fast as a bush fire.

Inland flooding and rain helped the growth of grass, which has now dried out and is “causing a real concern”.

More than one in 10 Australians, and one in six children, have asthma, accounting for 2.4 million people nationally. Some 5 to 10 per cent of cases are severe.

The review acknowledged 1483 premature deaths in 2012 were due to outdoor air pollution, with about half of these linked to road transport pollution.

Environmental scientists suggest the premature death rate associated with air pollution is as high as 3000 deaths a year in Australia.

Asthma Foundation CEO Michele Goldman urged people to be alert to any changes or worsening of asthma symptoms, to stay indoors and carry their relievers wih them at all times while the warning remained in place.

“We would highly recommend people have an up-to-date action plan from their GP, and to take their preventer medication regularly to minimise the effects when they are exposed to poor air quality,” Ms Goldman said.

Thursday will be much more bearable, with maximums of 27 degrees tipped for Sydney and a couple of degrees warmer in western suburbs before conditions warm up again.

“The severe fire danger will be back on Friday,” Mr Zmijewski said.

Previous article‘We had nothing to give him’: the human cost of malnutrition in Maharashtra
Next articlePM Modi at Vibrant Gujarat Summit: We are on threshold of becoming world’s most digitised economy
The Indian Telegraphhttp://www.theindiantelegraph.com.au/