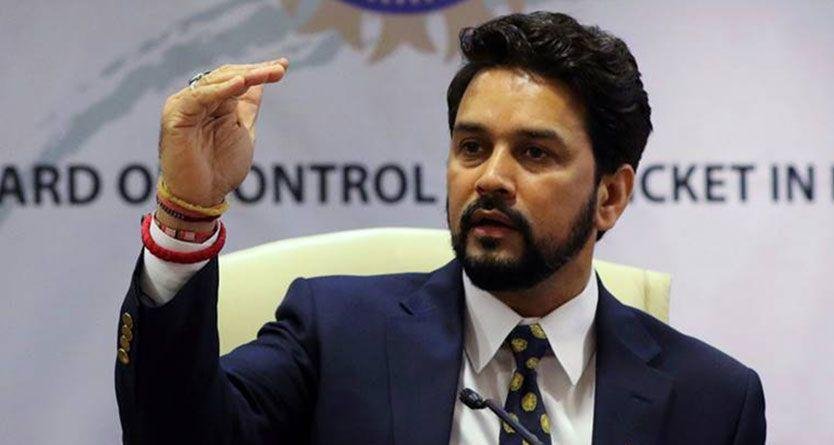 Supreme Court also issued a showcause notice to Anurag Thakur, under charges of perjury and contempt of court, for allegedly lying under oath.

THE SUPREME Court on Monday removed BCCI President Anurag Thakur and BCCI Secretary Ajay Shirke from their posts, saying cricket “is not a personal turf or fiefdom”. It said Thakur had rendered himself “unfit” by “obstructing” the court’s orders. The bench led by Chief Justice of India T S Thakur also issued a showcause notice to Thakur, under charges of perjury and contempt of court, for allegedly lying under oath in his attempt to block implementation of measures proposed by the court-appointed Lodha committee.

Hours after the court order, Thakur uploaded a video clip on social media with his reaction. “If Supreme Court judges feel that BCCI could do better under retired judges, I wish them all the best. I am sure Indian cricket will do well under their guidance… my commitment to the best of Indian cricket and autonomy of sports will always remain,” he said.

The bench, also comprising Justices A M Khanwilkar and D Y Chandrachud, held that “Thakur has by his actions and conduct rendered himself unfit for continuance as President of BCCI… He has obstructed and impeded the implementation of the directions contained in the judgment… Thakur is liable to be proceeded with for contempt of court for having obstructed and impeded the orders of this court. Thirdly, prima facie we are of the view that Mr Thakur has made statements on affidavit before this court which are false to his knowledge.”

“Anurag Thakur, President of BCCI, and Shri Ajay Shirke, Secretary, BCCI, shall forthwith cease and desist from being associated with the working of BCCI,” said the court.

“The President, Secretary and office-bearers of BCCI have obstructed the implementation of the final directions of this court on the basis of a specious plea that its state associations are not willing to abide by the directions. This court, having furnished sufficient opportunities to BCCI to comply, is constrained now to take recourse to coercive steps to ensure that the directions contained in its final judgment and order are not left to be a writ in sand,” it said.

“The committee of administrators would have the power to issue all appropriate directions to facilitate due supervision and control,” said the court, clarifying that all other BCCI office-bearers may continue, subject to their filing undertakings to abide by the court’s orders on reforms. The bench also reiterated its directive that a person shall be disqualified from being a BCCI office-bearer if he is not an Indian citizen; has turned 70; is a minister or a government servant; has been charged by a court of law in a criminal case; holds any office or post in a sports or athletic association or federation apart from cricket.

“Persons who have a vested interest in continuing in their positions in spite of the norms noted above have ensured that the writ of the court is obstructed and impeded. We need to emphasise that the turf of the cricket field is not a personal turf or fiefdom,” stated the court. “We must hence order and direct that no person shall hereafter continue to be or be entitled for appointment as office-bearer of BCCI or a state association in breach of the above norms. All existing office-bearers of BCCI and of the state associations who do not fulfill the above norms shall, with effect from the date of this order, stand disqualified.”

During an earlier hearing, the court had threatened to initiate contempt and perjury proceedings against Thakur for allegedly issuing a false statement on seeking a letter from the ICC to emphasise that the BCCI’s registration would be in peril if the Lodha panel’s recommendation on appointing a CAG nominee was accepted. While Thakur said he had only sought a clarification regarding this, ICC Chairman Shashank Manohar’s email response to the Lodha panel stated that Thakur had indeed asked for a letter with respect to the CAG nominee.