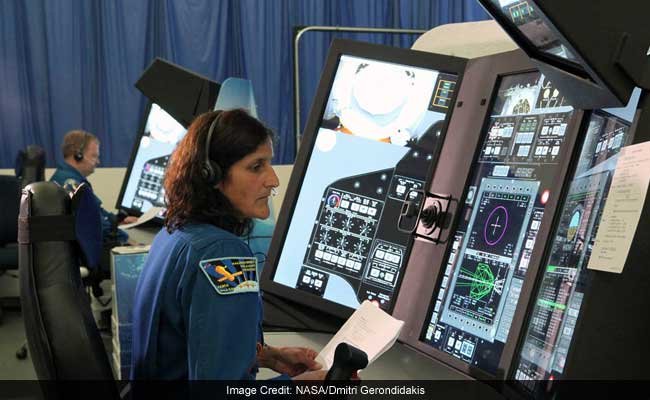 Indian-born NASA’s commercial crew astronaut Sunita “Suni” Williams and her colleagues have successfully tested a new generation of training simulators that will prepare them for launch, flight and returns aboard Boeing’s CST-100 Starliner spacecraft.

The CST-100 Starliner crew capsule is designed by Boeing in collaboration with Bigelow Aerospace as their entry for NASA’s Commercial Crew Development (CCDev) programme.

Its primary mission is to transport crew to the International Space Station (ISS) and to private space stations such as the proposed Bigelow Aerospace Commercial Space Station.

“These simulators have touchscreen displays, which means they are more versatile than previous spacecraft trainers,” Williams said in a statement.

“We can run multiple simulations by just changing software and then put that same software into a bigger crew simulator, which we will use to train the whole crew for a spaceflight,” she added.

When wired into the extensive Boeing and NASA networks, the simulators will interact with launch and mission controllers to run rehearsals that are critical to preparing a crew to successfully fly a mission and recover from unforeseen events.

Later, a simulator the size of a Starliner flight deck will be finished and used in Houston to train the full-flight crew.

NASA selected four astronauts – Williams, Boe, Bob Behnken and Doug Hurley – to train for test flights aboard the Starliner and SpaceX Crew Dragon to the ISS.

The flight assignments have not been set so all four of the astronauts are rehearsing for the Starliner and Crew Dragon test flights to the space station.

The part-task trainers are part of a suite of cloud-based and hands-on trainers that Boeing has built to prepare astronauts and mission controllers.

The trainers will be shipped to NASA’s Johnson Space Center in Houston this year so astronauts can use them daily to practice numerous situations from normal operations to unlikely emergencies.

Astronauts typically spend hours training in simulators for every minute they fly in space so they are familiar with planned activities and can react quickly to unusual events.

They rehearse their own decisions, as well as learn the teamwork vital to successfully overcoming a hurdle.

Simulators have long been a staple in astronaut training, starting with those used by Mercury astronauts and advancing to the motion-based flight deck simulator shuttle astronauts spent hours inside working on launch and landing skills.

“A considerable part of what we do here at Boeing facility in St. Louis has been centered around developing trainers,” said Pete Meisinger, program manager for Boeing’s Space Vehicle Training Programme.

“The simulations are important for the flight tests, because this is the place to put it all together,” Boe added.

“As we get more familiar with the systems, the training wheels will come off and we will start advancing to the next systems. Eventually, we will work with another crew member, then with the whole flight control team,” he noted.