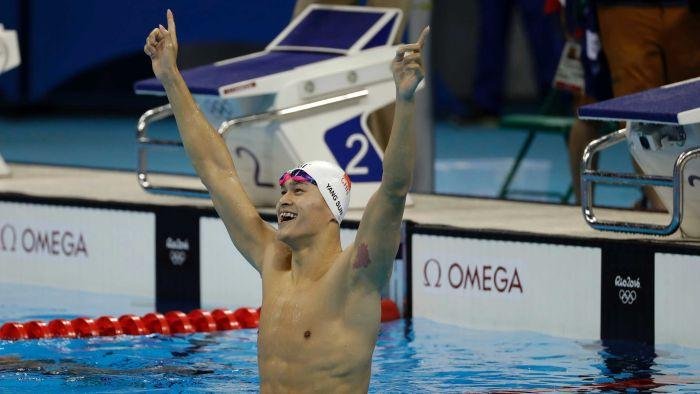 The Swiss Federal Supreme Court’s decision to set aside the eight-year ban given in February to Chinese world and Olympic swimming champion Sun Yang has made headlines around the globe.

It’s a landmark case that is far from over with questions that go to the very heart of anti-doping, sports justice and athletes’ rights.

The decision is monumental in two ways.

Firstly, it’s not impossible but extremely rare for the Swiss court to set aside findings of the Court of Arbitration (CAS). It does not review findings as you might expect in a traditional appeal process, but only considers matters of “procedural irregularity”.

Secondly, the procedural irregularity in this case centres on one of the senior arbitrators at the CAS — former Italian foreign minister Franco Frattini — who presided over the Sun Yang panel that handed the swimmer the maximum eight-year ban after finding him guilty of an anti-doping rule violation (this will be discussed in more detail later).

Sun’s appeal provided evidence of anti-China sentiments expressed on Mr Frattini’s Twitter feed during 2018 and 2019, with the swimmer’s lawyers questioning the judge’s neutrality.

In a statement the court said it had “approved the request by the Chinese swimmer Sun Yang for revision of the arbitral award of the Court of Arbitration for Sport (CAS) … on the grounds of bias of one of the arbitrators of the CAS”.

“The award of the CAS is set aside. The CAS will have to render a new award in the case of Sun Yang in a different composition of the panel,” it said.

The full reasoning will be issued at a later date, but as of now Sun is free to resume swimming and training with his teammates.

If he is fit enough, and so inclined, he may even attempt to qualify for the delayed Tokyo 2020 Games.

Do ‘drug cheat’ accusations stack up?

China’s Sun Yang has faced accusations of being a ‘drug cheat’ by opponents and media. But, writes Tracey Holmes, the truth may be a little more complicated than that.

The World Anti-Doping Agency has already announced it will head straight back to CAS to have the case heard again “chaired by a different president”.

The CAS is on notice.

CAS director-general Matthieu Reeb told The Ticket: ”The CAS very much regrets that the objections against the president of the panel have not been raised earlier and that they could not be examined during the CAS proceedings.”

“Obviously, the statements published by the president of the panel on his personal Twitter account in 2018 do not represent the view of CAS,” he said.

“In any event, the CAS will accept the ruling of the Swiss Federal Tribunal (SFT) and will immediately resume the procedure WADA v/ Sun Yang & FINA in accordance with the instructions given by the SFT.”

The original CAS hearing ran for 11 hours and was marred by serious translation problems.

Sun is Chinese and speaks Mandarin and a little English, certainly not enough to be able to have a detailed, legal conversation in the sports court.

Despite having numerous registered arbitrators that are fluent in Mandarin, none were selected as part of the three-person panel.

It is difficult to imagine an Australian athlete would ever have to argue his or her case in front of three jurors, none of whom spoke English.

Much commentary around the Sun case has focused on the swimmer and the entourage “smashing vials of blood”.

This is factually incorrect and yet continues to be published again and again.

A full reading of the CAS hearing, or a complete viewing of the 11 hours available on the CAS website, establishes that Sun’s vial of blood remains in existence — stored at the hospital where his doctor works, although inadmissible since it was not taken by drug testers at the swimmer’s home on the night of September 18, 2018.

In a nutshell, Sun’s mother phoned him late in the evening to tell him testers had arrived and he should get home within the allotted hour. He did so. He provided a blood sample before noticing anomalies with the testing party’s accreditation and documentation.

Mack Horton’s podium protest illustrated why athletes often feel let down by those they expect to protect their sport from doping, writes Richard Hinds.

Sun offered to wait until a properly accredited party arrived to test him, which they declined to accept, and in response the swimmer’s legal and medical advice was not to let his blood sample — now locked in a tamper-proof casing — be taken away.

The doping control party refused to leave without the casing.

The only option was for a security guard at the compound where Sun lives to break open the container to allow Sun’s doctor to take custody of the blood sample and allow the doping control officers to leave with their casing.

The night in question was Sun’s ninth drug test in 12 days. Until his ban he was the most tested athlete on the planet, asking to provide urine or blood, on average, once every two weeks.

He knows the rules and he is familiar with the process.

If Sun was concerned about “failing” a test, he need only have not gone home. An athlete can miss two tests in a calendar year without incurring a sanction.

But he didn’t choose that option. He chose to go home.

Jack case a reminder of dangers of sports supplements

Experts say the warnings are very clear when it comes to athletes taking sports supplements.

As WADA successfully argued in the CAS hearing, though, the minute Sun refused to let the doping control officers leave with his blood — despite serious questions over their accreditation and paperwork — he had committed an “anti-doping rule violation”.

The CAS decision, at different times, notes “the panel considers that an eight-year period of ineligibility is, although justified in application of the rules … a severe sanction”.

Also, “there is no evidence before the panel that the athlete may have engaged in doping activity between 4 September 2018 and the date of the present arbitral award” and “on balance the panel concludes that the results in the period prior to the sanction taking effect should not be disqualified”.

These are not findings generally associated with a “drug cheat”.

Separately, it noted the “attitude” of the swimmer and his lack of contrition: “It was striking that, in the course of his testimony, at no point did the athlete express any regret as to his actions.”

Given the Swiss Supreme Court’s judgment that the neutrality of the panel chair is questionable, it is reasonable to consider whether some of the findings he presided over may have been influenced by his alleged bias.

It is a fair assumption that an athlete who believes he is innocent, in an 11-hour hearing in which none of the arbitrators can understand what he is saying, may become animated, even frustrated — an attitude that might be understandable given the circumstances.

Not only must justice be done; it must also be seen to be done.

The CAS has work to do to ensure its legitimacy is not undermined.

The panel also noted that once the new World Anti-Coping Code comes into effect on January 1, 2021, Sun could apply to have the eight-year ban reduced.

That won’t be necessary now, as WADA’s promised re-hearing of the case will be conducted in 2021 under the new code — that includes an Athletes’ Anti-Doping Rights Act that speaks of fair testing programs, accountability and data protection.

Fair, impartial and operationally independent hearings and disputes must also be resolved reflecting the principles of the Convention for the Protection of Human Rights and Fundamental Freedoms.

The Court of Arbitration will now be able to offer decisions that take into account the facts of a particular case, rather than the previous “one size fits all” form of justice where the only question was not guilty or innocent but guilty by how much?

No doubt the reaction to the ongoing case will differ between east and west.

How different nations responded to the news

There were almost 4 million comments on Weibo, China’s social media support, by midday on the same day the news broke of Sun’s ban being put aside just hours earlier.

“No matter what foreigners say, I support Sun Yang [all the way],” wrote one supporter.

Another fan was looking forward to the Tokyo Olympics.

However, not all of the comments posted were positive.

“[Sun Yang has] the lowest ever EQ (emotional intelligence), no regard to legal process, and didn’t care about rules and regulations. The General Administration of Sports of China would not hire him again.”

In Australia it was plenty of negative commentary, although a little mute considering the number of articles, interviews and general backslapping that occurred when Sun’s career-ending ban was first announced.

At that time it was suggested a pool be named after Australia’s Mack Horton, and a statue erected in his honour, since it was his high-profile protest at the 2019 World Swimming Championships — when the Australian refused to stand on the podium to receive his silver medal behind Sun’s gold — that attracted such widespread attention ahead of the initial CAS hearing.

It’s easy to see this as another case of China versus Australia as the relationship between the two has soured.

But it’s not that at all.

It’s a case of the legitimacy of anti-doping and sports justice being meted out fairly, and consistently, for all.