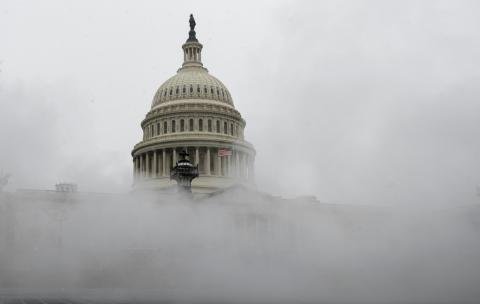 Asian markets sank Monday as news of a US stimulus agreement was overshadowed by surging virus cases and the imposition of a strict lockdown in England, while the pound was also hit by fears over stuttering Brexit talks.

Oil prices also sank as the new containment measures hammered expectations for travel over the Christmas period, with the discovery of a mutated and more infectious strain of the coronavirus in Britain also leading several governments to ban flights from the country.

After months of painful, combative talks, US lawmakers on Sunday finally announced they had reached a deal for a new economic rescue package worth nearly $900 billion.

The bill includes aid for vaccine distribution and logistics, extra jobless benefits of $300 per week, and a new round of $600 stimulus checks.

“We’ve agreed to a package of nearly $900 billion. It is packed with targeted policies to help struggling Americans who have already waited too long,” Republican Senate Leader Mitch McConnell said in a statement.

Democratic House Speaker Nancy Pelosi and the party’s top senator Chuck Schumer added that the deal “delivers urgently needed funds to save the lives and livelihoods of the American people as the virus accelerates”.

While expected, the deal’s announcement will come as a relief to markets, which have been desperate for Washington to give the world’s top economy a much-needed shot in the arm as it struggles with the impact of Covid-19.

Also at the weekend, US authorities gave the green light to another vaccine, made by Moderna, paving the way for it to be rolled out this week.

However, the news comes as countries battle a frightening surge in infections that is battering economies once again. Among the worst-hit is the United Kingdom, where the government at the weekend tore up a planned relaxing of containment measures for Christmas.

Prime Minister Boris Johnson made the announcement as the country is hit by a new strain of the virus that is more infectious, and put millions of Britons into a strict new lockdown.

“For many, the end of 2020 cannot come soon enough,” said Simon Ballard, at First Abu Dhabi Bank Pjsc. “The pathogen has wrought mayhem across financial markets and so we expect the New Year wish of many market participants to be that the arrival and initial distribution of coronavirus vaccines now signals light at the end of a very tiring and debilitating tunnel.”

The pound, which had last week been sitting at highs not seen since mid-2018, sank against the dollar while it was also under pressure from the euro. The European unit was also down against the greenback, while a virus flare-up has led to some restrictions in Sydney, hitting the Australian dollar.

“Despite some encouraging news on the US stimulus front as US lawmakers look set to toast the celebratory inking of stimulus deal, Asia investors are waking up to a currency market air pocket as the pound and euro sell in early trade as a mutant strain of the virus is about to throw a chilling wet blanket over the holiday season in Europe,” said Axi strategist Stephen Innes.

Tokyo, Hong Kong, Sydney, Seoul, Singapore, Manila, Bangkok and Wellington were all in the red, though Shanghai and Taipei rose slightly.

Adding to the selling pressure are concerns about the lack of progress on a post-Brexit trade deal with Britain and EU negotiators still stuck on fishing rights.

A senior UK government source said the talks were expected to continue Monday but “remain difficult and significant differences remain.

After months of wrangling, US lawmakers have finally reached an agreement on a new stimulus for the beleaguered economy
AFP / ANDREW CABALLERO-REYNOLDS

“We continue to explore every route to a deal that is in line with the fundamental principles we brought into the negotiations,” he added.

Time is running out for a trade deal, with Britain due to leave the EU single market in less than two weeks, but both sides of the intense negotiations in Brussels now expect the talks to run on for three or four days.

Oil prices were also taking a hefty knock on concerns about the negative impact on demand caused by new restrictions, with both main contracts down more than three percent.

“Stock markets can count their lucky stars that vaccine optimism so far has been able to Teflon the broader market downside,” Innes added. “But the same can’t be said for oil prices.”