A newly released letter from Australian naturalist Steve Irwin has revealed his gratitude to his parents for building his character, ethics and happiness.

The letter, written when he was 32 but only recently found, said it took him “over to 30 years” to realise his parents were his “best friends”.

Irwin’s enthusiastic interactions with wildlife on television show The Crocodile Hunter propelled him to fame.

He died in 2006 when a stingray’s tail stabbed him in the heart. 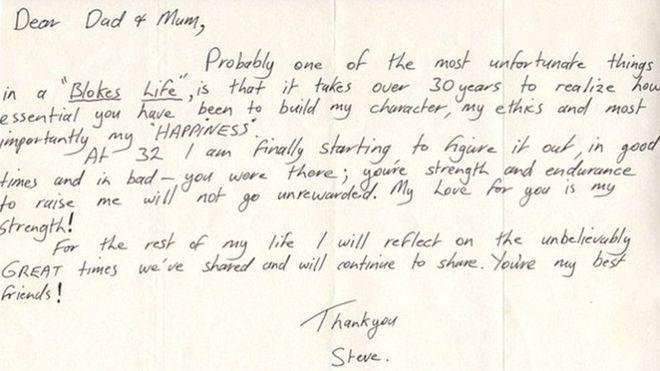 The letter is published in a new memoir by Irwin’s father, Bob Irwin, on the tenth anniversary of his death.

Bob and his wife Lyn were also naturalists, bringing their children up at their own reptile park on the Sunshine Coast.

“Probably one of the most unfortunate things in a ‘Bloke’s Life’ is that it takes over 30 years to realise how essential you have been to build my character, my ethics and, most importantly, my HAPPINESS,” Irwin wrote to his parents, 12 years before his death.

“At 32, I am finally starting to figure it out. In good times and in bad, you were there. Your strength and endurance to raise me will not go unrewarded. My love for you is my strength!’

“For the rest of my life I will reflect on the unbelievably GREAT times we’ve shared and will continue to share. You’re my best friends!”

Bob Irwin told Australian media he only found the letter this year, when it fell out of a book. He included it in his memoir, entitled The Last Crocodile Hunter: A Father and Son Legacy.

The envelope had written on it: “Please be happy to know that your strength and wisdom have been passed on.”

He said working on the book had reminded him of “Steve’s boundless energy, infectious humour and unrestrained passion for wildlife”

“What he stood for and what he was able to achieve means just as much now as when he was here in the physical world,” Mr Irwin said.