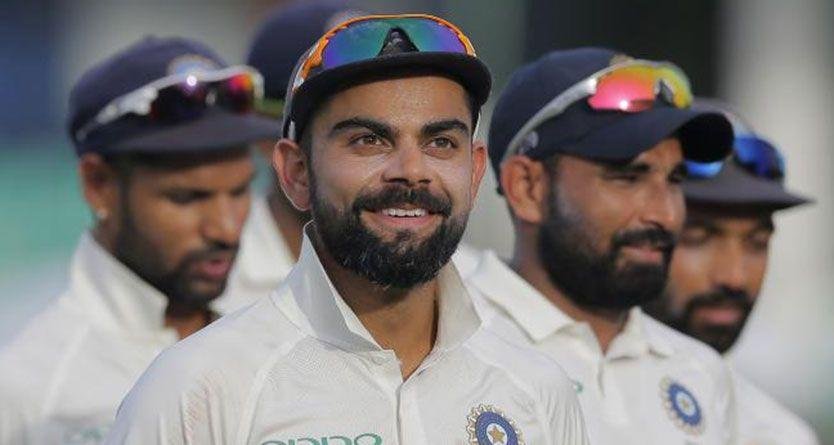 Virat Kohli’s India is one Test series away from matching Ricky Ponting’s Australia for the most consecutive Test series wins.

Ravindra Jadeja bagged his ninth five-wicket haul in Test cricket on Sunday to help India crush Sri Lanka by an innings and 53 runs in the second Test and secure the three-match series 2-0 with a match to be played.

It is the eighth Test series in a row the Indians have won — a run that began in Sri Lanka in 2015.

The only team to have won more consecutive series is Australia, which won nine in a row under Ponting between the 2005 one-off Test against an ICC World XI and 2008’s three-Test tour of the West Indies. Coincidentally, it was India that ended Australia’s winning streak by taking out the 2008 Border-Gavaskar at home.

The only other side to have won eight series in a row is England. That run stretched from 1884 to 1890 and was ended by Australia before the English had the chance to trump South Africa in a one-match series they were playing at the same time.

The Indians will not get the chance to equal Australia’s nine-series run until November-December when they face Sri Lanka on home soil. If the Indians come out on top in that series, their nine-campaign streak will have featured three wins over Sri Lanka (two away, one at home), one over the West Indies in the Caribbean, and one each against South Africa, New Zealand, England, Bangladesh and Australia at home.

To topple Australia’s record, India would then have to beat South Africa in South Africa — something no Asian side has ever pulled off.

Batting first in the second Test in Colombo, India declared its first innings on nine for 622 and then dismissed Sri Lanka for 183 and enforced the follow-on, commanding a 439-run lead. Sri Lanka performed better in the second innings but couldn’t prevent an innings defeat when they were bowled out for 386 with more than a day to spare.

Opener Dimuth Karunaratne and No. 3 Kusal Mendis scored centuries and shared 191 runs for the second wicket to lift Sri Lanka’s spirits in the second innings. Mendis scored his third Test century and was out for 110 off 135 deliveries, a knock that included 17 boundaries.

Karunaratne was then joined by Angelo Mathews and the pair consolidated the innings going to lunch on four for 302.

However, Jadeja dismissed Karunaratne soon after lunch having him caught by Rahane with the total on 310. Karunaratne made 141 for his sixth test century. He spent more than six hours at the crease, faced 307 deliveries and hit 16 boundaries.

The lower-middle order could not capitalise on the momentum as Sri Lanka lost its last five wickets for 76 runs.

adeja finished with 5-152 and collected seven wickets in the match. He also made an unbeaten 70 in India’s only innings. His versatile effort won him the player of the match award.

“You expect teams playing Test cricket to come out and play like that. Because of the way we got wickets in the first innings sometimes frustration can creep in,” he said. “Then you have to give credit to the batters as well, to play like that on a pitch like that; it was high quality batting.”

Sri Lanka captain Chandimal said India’s big first-innings total put his team on the back foot but he took strength from how they bounced back in the second innings.

“As the captain, I am proud of the way the guys played in the second innings so we have to get the positives out of that.”

He added that although the series is already lost, his team will now focus on trying to win the third Test because of a win against the No.1-ranked side would provide a major confidence boost.

The third and final Test will begin in Pallekele on Aug. 12.