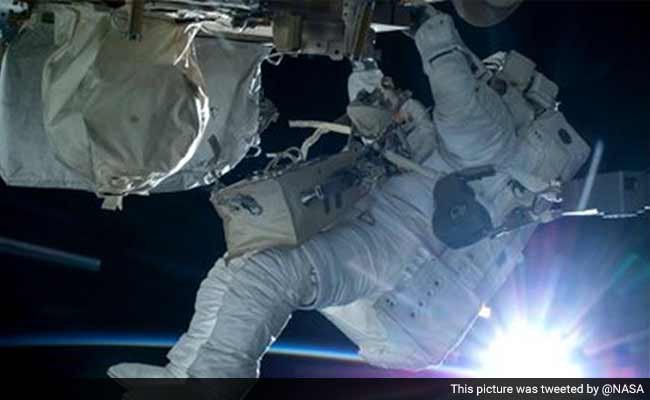 WASHINGTON:  Two US astronauts aboard the International Space Station began a spacewalk Thursday to make repairs and install new equipment.

Americans Jeff Williams, 58, and Kate Rubins, 37, emerged from the ISS at 1153 GMT for a mission expected to last about six and a half hours.

It was their first time in space in nearly two weeks. At the time, they attached an international docking adaptor in anticipation of increased private spaceship traffic.

This time, Williams and Rubins will retract one of the thermal radiators outside the space station. Astronauts unsuccessfully tried to push it back into position last year.

They also will tighten the supports for solar antennas and install the first of several high-definition television cameras that will be used to monitor spaceships transporting freight and astronauts.

Their mission is the 195th spacewalk undertaken to build and maintain the ISS.

It is the fifth spacewalk for Williams, a veteran astronaut who on August 19 surpassed US astronaut Scott Kelly’s record for the most cumulative days in space for an American.

Kelly has 520 days in space over his career.

Williams will have 534 days in space by the time he wraps up his stint at the ISS and returns to Earth next week.

It is the second spacewalk for Rubins. She is the 12th woman to walk in space.

In their August 19 spacewalk, Williams and Rubins installed a special parking spot on the ISS and connected power and data cables for the docking adaptor.

The fittings will enable the space station to share power and data with visiting spaceships.

NASA describes the docking adaptor as a “metaphorical gateway to a future” that will allow a new generation of US spacecraft — the first since the space shuttle program ended in 2011 — to carry astronauts to the space station.

The second docking adaptor is expected to be launched in late 2017.

The adaptors will work with Boeing’s CST-100 Starliner and SpaceX’s Crew Dragon, two spaceships under construction that are planned to ferry astronauts to the space station.