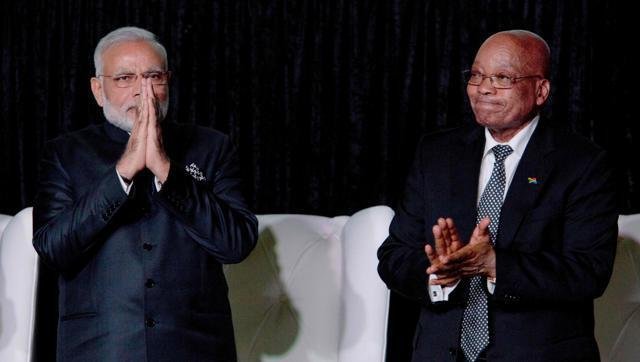 India is working to clock a growth rate of 8%, Prime Minister Narendra Modi said in Johannesburg on Friday, while attributing the rise of the country to HOPE, an acronym that stood for ‘Harmony, Optimism, Potential and Energy’.

He told the Indian diaspora that India was “one of the brightest spot in the global economy” and a “land of opportunities” for those who want to invest.

Modi said his government was working in a campaign mode to create 500 million new jobs by 2022 and transform rural and urban areas of the country through infrastructure development.

“While the world is marked by slowdown, India has registered a growth of 7.6% this year and we are working to grow even at 8% in the years ahead,” he said, addressing an estimated gathering of 11,000 members of the Indian diaspora.

Modi, wearing a ‘Madiba’ shirt identified with anti-apartheid icon Nelson Mandela, said India’s dynamism was not about mere words but it is driven by concrete action.

“It (dynamism) is defined by our commitment to change the face of the Indian economy. Not just through sustained rapid economic growth but through multiple transformations that aim to uplift,” the Prime Minister said.

“India’s rise can be defined as HOPE — Harmony, Optimism, Potential and Energy….India’s rise is a story of rare resilience, renewed resurgence, superb speed and spectacular scale,” he said in his 40-minute address.

He said his government wanted enterprises to flourish, businesses to grow and the country to rise. “For this, we are already shaping a policy framework that strengthens India’s ability to build trade, manufacturing, innovation and investment partnerships with other countries in the world,” he added.

Modi said his intent was to ensure that the 800 million youth of India should fulfil the dreams, not only of India but also the global demand.

“It is not only the economy or society that is racing ahead but the mindsets are also changing,” he said, giving an overview to the audience about the developments in India that he wanted them to see.

As South Africa works for its economic prosperity, safety and security, it will find in India a “trusted and reliable partner”, Modi said.

He said while terrorism was a global challenge, fight against diseases such as AIDS and Ebola were some of the other priorities.

The Prime Minister noted that South Africa was the place where Mahatma Gandhi “conceptualised his politics” and is the “birthplace of Satyagraha”.

Describing South Africa as “karambhoomi (land of work)” of Mahatma Gandhi, he said this country “transformed Mohandas into Mahatma”.

He said Mahatma Gandhi held South Africa dearly as he believed that he had got rebirth in this land.

Hailing the Indian diaspora in South Africa as “proud sons and daughters of Indian heritage”, he said several Indians had gone to jail with Mandela and sacrificed their lives in the fight against apartheid.