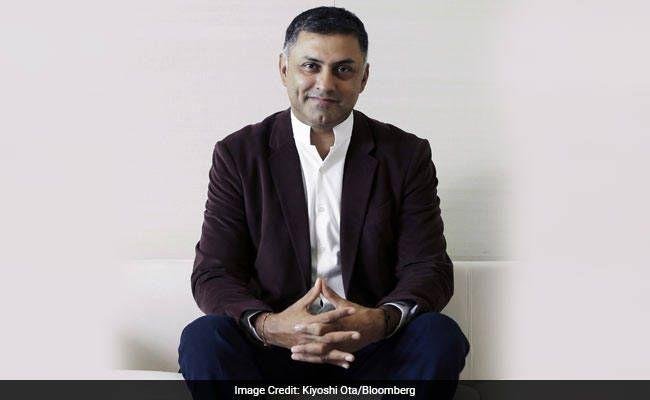 SoftBank Group Corp. President Nikesh Arora was paid 8.04 billion yen ($73 million) for the company’s latest fiscal year, putting him among the top paid executives in the world for the second year in a row.

The pay package for Arora, who joined SoftBank from Google Inc. in 2014, is in the same range as those for Apple Chief Executive Officer Tim Cook and Walt Disney’s Bob Iger, according to data compiled by Bloomberg. Masayoshi Son, SoftBank’s founder and CEO, received compensation totaling 130 million yen ($1.2 million).

Arora was paid 16.6 billion yen in the previous fiscal year, when he started working at SoftBank, setting a record for compensation in Japan. SoftBank said at the time that the pay package included a signing bonus. Arora held unvested Google stock options and other securities worth more than $76 million at the end of 2013, according to the last proxy statement before his departure.

“This seems like a lot of money by Japanese standards, but there are plenty of executives overseas who get paid at the same level,” said Tomoaki Kawasaki, an analyst at Iwai Cosmo Securities Co. “Arora already has been building a track record at SoftBank with some overseas acquisitions. Having him at the company also helps attract high-grade overseas talent.”

According to Bloomberg’s executive-pay analysis, Patrick Soon-Shiong is currently the highest-paid CEO, with compensation valued at $329.7 million at NantKwest Inc., a cancer-research company. Among non-CEOs in the U.S., only Blackstone Group President Hamilton Evans James had a bigger pay package than Arora. By comparison, Lloyd Blankfein, Goldman Sachs’s CEO, was paid $33.1 million.

Arora’s compensation includes 1.56 billion yen paid by other SoftBank units, according to a proxy issued by the mobile and Internet company on Thursday. SoftBank’s Ken Miyauchi, who runs the domestic business, was awarded 317 million yen.

Son has said that Arora is the most likely candidate to succeed him. Arora, who is responsible for global operations, plans to invest about $3 billion each year as SoftBank seeks to invest in startups that can become the next Alibaba Group Holding, the Chinese e-commerce company that pulled off the world’s largest initial public offering in 2014.

“The specific level of remuneration is not a concern as long as Arora delivers value,” said Cedric Araud, a fund manager at Capitalatwork Foyer Group in Luxembourg, which holds SoftBank shares.

He said he was encouraged by the prospect of SoftBank selling its stake in the Finnish game maker Supercell. The sale could value the whole of Supercell at more than $5 billion, a person familiar with the matter said this month. “This would bring in a nice profit and shows that Arora can improve SoftBank’s capital allocation,” said Araud.

Arora has also made an enormous personal bet on the future of SoftBank. Last August, he said he would buy 60 billion yen of the company’s shares, worth $483 million at the time. That was the largest insider purchase by an executive in Japan for at least 12 years.

SoftBank’s stock is down about 20 percent since Arora joined the company. The shares fell 3.7 percent to 5,975 yen in Tokyo trading.

Arora is being targeted by a group of investors who are calling on SoftBank’s board to investigate and possibly dismiss him, for a range of issues including alleged conflicts of interest. The group also cited Arora’s compensation as an area of concern, according to a letter to the board dated Jan. 20.

Son said in response to the allegations that he has “complete trust in Nikesh and one thousand percent confidence in him.”