Sikh man who was barred from entering flight, turns plight into cause 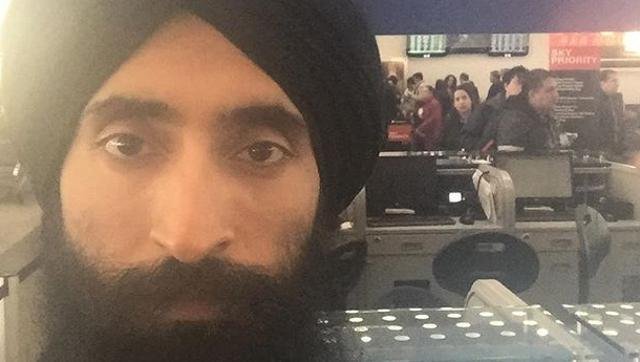 An Indian American Sikh man barred from boarding his flight home from Mexico City Monday for refusing to remove his turban has turned his plight into a cause.

Waris Ahluwalia, an actor and designer who made headlines in a GAP ad in 2013, is now refusing to be flown home by officials of the airline chastened by the outpouring of outrage.

Ahluwalia has posed a three-point demand to the airline, Aeromexico, according to the Sikh Coalition, an advocacy group, for agreeing to be put on a flight home to New York.

“I realize that this isn’t about my convenience or getting home for lunch today,” Ahluwalia told The Washington Post. “I realize that if I walk away, somebody else was going to go through this experience again.”

He added: “It doesn’t feel like a choice I can make. I don’t think I can just get on that plane.”

He wants Aeromexico to issue a public apology, give an undertaking to provide Sikh awareness training to staff and train them on how to screen passengers with religious headgear.

According to multiple news reports, Ahluwalia was about to board his Aeromexico flight from Mexico City after going through the mandatory screenings when he was stopped.

Ahluwalia was put through another round of screening now. They searched his bag, patted him down and asked him to remove a sweatshirt he was wearing.

They asked him to remove his turban, which he refused. “I responded matter-of-factly that I won’t be taking off my turban,” he told the New York Times.

“And then they talked amongst themselves and they said, ‘O.K., then you are not getting on the flight.’?”

Sikh men are routinely subjected to extensive and intrusive screening at US airports, even for domestic flights. A former Indian Permanent Representative to the UN wasn’t spared either.

This has little to do with their being Sikh. Most times they are subjected to this treatment because they are mistaken for West Asians, specially men, who also use similar headgear.

A Sikh owner of a gas station became the first victim of the 9/11 backlash when he was shot dead by a man who wanted to avenge the attacks just four days after, on September 15.

Ahluwalia’s GAP ad was defaced in New York with anti-Muslim graffiti. Someone wrote on it “Make Bombs”, a take on the ad campaign’s slogan, “Make Love.”

New York congressman Joe Crowley said in a tweet, “I’d say this is unbelievable but fact is Sikhs continue to face discrimination based on how they look. This must end.”

Ahluwalia, 41, lives in New York, and is known for his House of Waris jewellery line. He also acts, and worked in Wes Anderson’s “The Darjeeling Limited” and “The Grand Budapest Hotel.

He was still at the Mexico City airport Tuesday afternoon, according to an update tweeted by Sikh Coalition, which said he spent the night there.