If You Have To Shoot, Shoot Me, But Not My Dalit Brothers 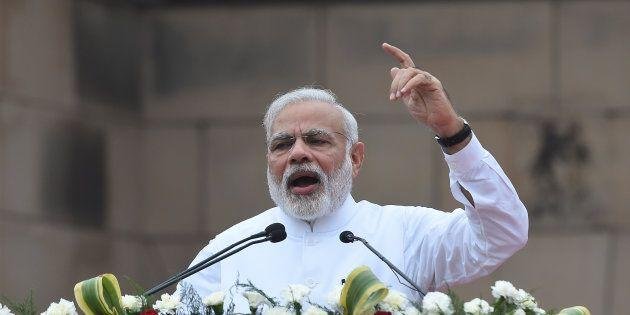 HYDERABAD — “If you want to shoot, shoot me,” Prime Minister Narendra Modi said, as he called for stopping the attacks on Dalits and the politics over it.

Making an emotional appeal, he asked people to protect and respect Dalits who have for long been neglected by the society.

“I would like to tell these people that if you have any problem, if you have to attack, attack me. Stop attacking my Dalit brethren. If you have to shoot, shoot me, but not my Dalit brothers. This game should stop,” he said addressing BJP workers here.

The Prime Minister said if the country has to progress it cannot ignore key mantras of peace, unity and harmony.

“Country’s unity is the main source of country’s development,” he said.

His comments come at a time when the NDA government is facing flak over incidents of violence against Dalits and Muslims by cow vigilantes in various states including Uttar Pradesh, Gujarat and Madhya Pradesh.

Mr. Modi said at times some incidents come to notice which give us “unbearable pain”. “It should be our responsibility to save and respect them (Dalits),” he said without referring to any particular incident.

Mr. Modi asked what right the perpetrators had to exploit Dalits and said the unity in society should be our priority.

“I know this problem is social. It is a result of sins which have crept into the society… But we need to take extra care and save society from such danger (of social strife),” he said. Mr. Modi said the society should not be allowed to be divided on the basis of caste, religion and social status.

Deprecating those who try to make political currency out of such issues, the Prime Minister said attempts to politicize those would only aggravate the problem.

“Those who want to solve this social problem, I request them to leave politics that divides the society. Divisive politics will not do any good to the country,” he said.