Shobana and Suresh excel in “AMMA” – A mother’s Dance 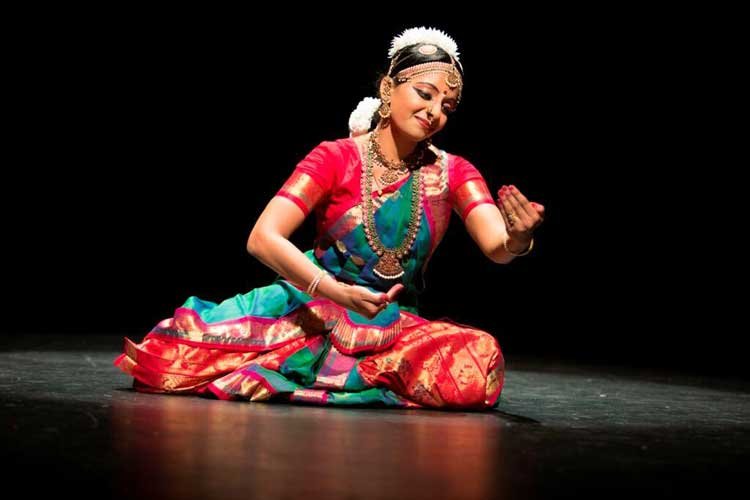 Amma a traditional Bharathanatyam concert that showcased the unconditional love, compassion & bonding a mother has with her children through all stages of life, presented by talented artistes Shobana Suresh and Chidambaram Suresh of Samarpana School of Indian Fine Arts, Sydney on Saturday 12th March 2016 at Casula Powerhouse Arts Centre.

The concert began with an invocatory song. Normally the invocation in a Bharathanatyam concert is towards God. In this concert it began with a rhythmically fast-paced invocatory song paying tribute to all mothers out there. This was followed by the central piece, the “Varnam”, which explored the ways in which a mother nurtures and contributes to her child’s development. As the dancer, Shobana conveyed her gratitude & devotion to her own mother in this piece.

In the second half of the concert, Shobana Suresh presented three well known bharathanatyam songs which portrayed the role the mother plays in three phases of an individual’s life: as a toddler, an older child and as an adult. The first of these (“Chinnan chiru killiye kannamma”), expresses the mother’s feelings of joy, affection & pride as she sees the development of her young child. The second song, “Madu meikkum Kanna”, is a dialogue between Krishna and his mother Yashoda, portraying a protective mother. The third composition, “Eththanai Sonnalum” depicted a mother who is angered by her daughter’s impatience and immaturity in dealing with her marital problems despite all her motherly advice about relationships.

Shobana Suresh then concluded with a Thillana (the finale), which was composed by Chidambaram R. Suresh, making our final salutations to all the mothers out there. Following the Thillana, Shobana finished with a very emotional song about the greatness of motherhood, called “uyirum neeye” – from the Tamil movie, Pavithra.  It was a delightful evening to many in audience.

Shobana Suresh and (her husband) Chidambaram R. Suresh are a professional dance duo, who run ‘The Samarpana School of Indian Fine Arts’. Shobana and Chidambaram Suresh were professionally trained in India under the senior most and distinguished Bharathanatyam dancer, Prof. C. V. Chandrasekhar. In Sydney, Suresh and Shobana work in other full time professions and contribute to this art form within the local Indian and Sri Lankan community. Shobana is also a trained counselor working with refugee children and adolescents, at STARTTS NSW.