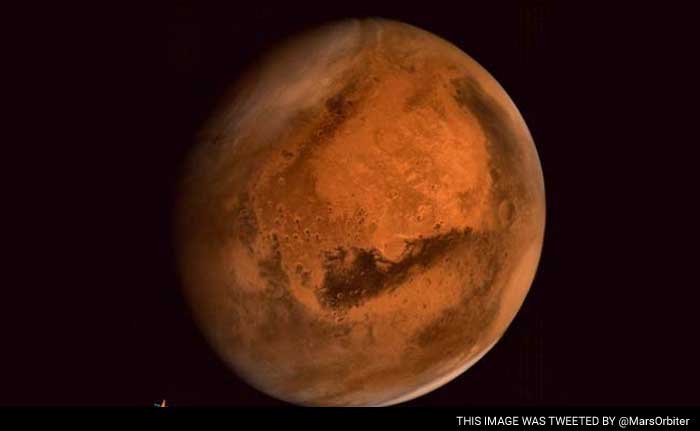 Cape Canaveral, Florida: Scientists have documented a solar storm blasting away Mars’ atmosphere, an important clue in a long-standing mystery of how a planet that was once like Earth turned into a cold, dry desert, research published on Thursday shows.

Unlike Earth, Mars does not have a global magnetic field to protect its atmosphere, leaving it vulnerable to solar ultraviolet radiation and high-energy blasts of gas and magnetic particles that stream from the sun during solar storms.

On March 8, NASA’s Mars-orbiting MAVEN spacecraft caught such a storm stripping away the planet’s atmosphere, according to a report published in this week’s issue of the journal Science.

The so-called “interplanetary coronal mass ejection” caused dramatic spikes in the number of oxygen and carbon dioxide ions spewing into space. The March storm was the largest of about a half-dozen similar events that MAVEN, or the Mars Atmosphere and Volatile Evolution Mission, has studied since arriving at the planet in September 2014.

The goal of the mission is to study what types of radiation are coming from the sun and cosmic sources and the impact on gases in Mars’ upper atmosphere.

The research will help scientists piece together a better understanding of how Mars evolved from a water-rich, warmer world – one that NASA’s Curiosity rover mission has shown could have supported life – into the arid desert that exists today.

The first big-picture look from MAVEN stops short of assessing what happened to Mars’ water. Scientists say there are two options: either it escaped into the atmosphere or it is locked in ice beneath the planet’s surface.

“The single question we’re really trying to get at is, did the Mars climate change … by loss to space or by some other process?” said lead MAVEN researcher Bruce Jakosky, a planetary scientist at the University of Colorado.

“By quantifying how much gas has been lost to space, we hope to be able to say whether that has been an important process,” he said.

Ultimately, the research should help scientists pin down a better window of time when Mars was most suitable for Earth-type life to evolve.

A trio of related papers in Science, along with 44 reports in the journal Geophysical Review Letters, shed more light on MAVEN’s findings, including the discovery that towers of dust are rising from the planet’s surface into space and that the planet has wide temperature variations in its atmosphere.