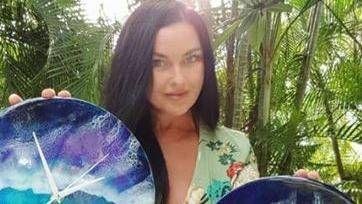 The 42-year-old, who spent nine years in Bali’s Kerobokan Prison, launched a clock-making business in January and has been using her Instagram page to promote the unusual side hustle.

The resin clocks are handmade by Corby and sell for $180 on her eBay page.

Radio host Jess Eva, from Triple M’s Moonman in the Morning, said she had messaged Corby on Instagram about the clocks.

Speaking on the show on Thursday, Eva said: “I messaged her about the clock… then she replied – they are $180!”

“I don’t want to give her advice, but I just feel like she’s missing a real good marketing opportunity. Why wouldn’t you use the slogan ‘nobody knows time like I do’?”

Corby posts weekly photos to her Instagram page showing off her latest clock designs and a link to her eBay page.

The winning bidders will also receive a signed copy of Corby’s book, My Story.

In January, Corby auctioned off a clock with the proceeds going towards the bushfire relief fund.

The quartz clock raised more than $700 for the WIRES Wildlife Rescue.

Colby seems to be enjoying the creative outlet and in April posted a photo captioned “Middle Aged Woman With A New Passion,” showing her followers how she mixes the epoxy resin.

The designs are beach-inspired and feature recycled wood and quartz.

Corby was sentenced to 20 years in jail in 2005 after she was found guilty of importing marijuana into Bali concealed in a boogie board bag.

Her sentence was reduced and she was released on parole in February 2014 after serving nine years.

She returned to Australia in May of 2017 to find a fanfare of media and supporters.

Earlier this year, Corby said said she had experienced an “onslaught” of abuse from “hundreds” of “savages” online.

“I am a Strong girl,” she posted, “but I shouldn’t always have to be.”

“Cyber Bullying is not going to go away, parents need to understand the mental trauma this abuse can cause & have a plan in place.”