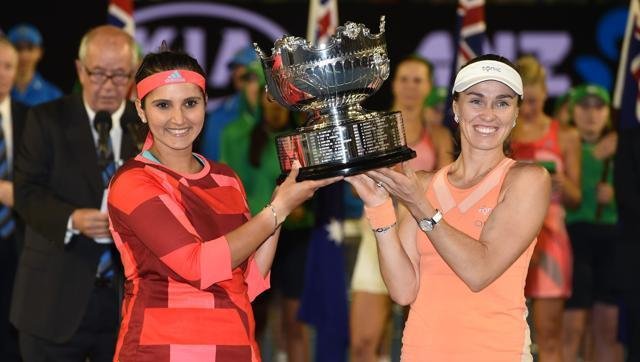 When winning becomes a habit, you can become the target. Peers try to dissect every weakness to show you’re not indestructible. However, none have been able to find the right weapons to stop Sania Mizra and Martina Hingis since they began the brilliant current run in women’s doubles. The Indo-Swiss pair, currently the best in terms of ranking, added the Australian Open crown to their resume on Friday.

Three successive Grand Slams, a total of 12 titles, and unbeaten since August 2015 — a 36-match winning streak — the pair dubbed ‘SanTina’ has been on a roll since coming together in March last year. Though they uncharacteristically dropped a set in the quarterfinals against Anna-Lena Groenefeld and Coco Vandeweghe, they got back to their usual dominating ways in the semis.

Tested by Czechs Andrea Hlavackova and Lucie Hradecka in the summit clash, they were pushed to a tie break in the long first set. But what works for the Indo-Swiss pair is the ability to spot a weakness and rectify it while on court. Add to that Sania’s booming forehands that left even the likes of Serena Williams impressed when the Indian was notching up wins on the singles circuit; and deft net play by Martina, still very agile at 35.

“I think we still have room for improvement. That’s what we did. Our relationship also got stronger. But I think (Sania) definitely sets me up. She’s one of the hardest-hitting players out there. Like her ground strokes, her return is really amazing, and her forehand is… there’s not that many people who can match her in the forehand rallies and me on the backhand side and at the net,” said Martina, who won her fifth doubles title in Melbourne.

Three in a row

With three successive Majors — they also won the Wimbledon and US Open titles last year — ‘SanTina’ have only the red clay of Roland Garros left to conquer. If they do, the pair will hold all four Grand Slams.

It would have been double celebration for Sania but the 29-year-old lost in the semifinals of the mixed doubles event with partner Ivan Dodig of Croatia. The top seeds were upset by fifth seeds Elena Vesnina and Bruno Soares 7-5, 7-6 (4) in a closely fought tie. Interestingly, Sania faced her former partners. With Brazilian Soares, she conquered the hard courts of Flushing Meadows in 2014 and with Russian Vesnina, she had a good run in 2011-2012.

Hlavackova and Hradecka are twice Major winners – the 2011 French Open and 2013 US Open. Having parted ways, this was their first final since coming together again. They had lost to Sania and Martina in the round robin stage of the WTA Finals in Singapore last year. It was a revenge of sorts for Sania, who had lost the 2011 French Open final to Czech pair while partnering Vesnina.

Sania and Martina complement each other on court. One has power, the other grace. Their ability to read each other’s game is so much in synch that it has left the doubles world baffled. It’s surprising why they hadn’t thought of coming together earlier than Indian Wells in March last year.

When Sania decided to focus solely on doubles because her injury-ridden body couldn’t cope with the rigours of playing singles, she was criticised. She was told playing doubles was taking the easy way out. But as her rankings improved, critics began to shut up. As the No 1 doubles player, she’s proved the decision was correct. On the other hand, Martina, who had created many ‘youngest ever’ records in her teens, retired, returned, retired again, tried coaching and then realised she still had competitive tennis left in her. Today, she’s found her calling in doubles. It took a while to find the right partner, but now that she has, the Swiss has no intentions of stopping.

After a dream season last year, 2016 has been perfect so far. It’s not far-fetched that the world No 1s can actually win a Calendar Grand Slam if their devastating form doesn’t dip. With only eight matches left to catch up with the record of 44 straight wins set by Jana Novotna and Helena Sukova in 1990 — the second highest and behind the 109 wins by Martina Navratilova and Pam Shriver — ‘SanTina’ has no plans to let slip that opportunity.