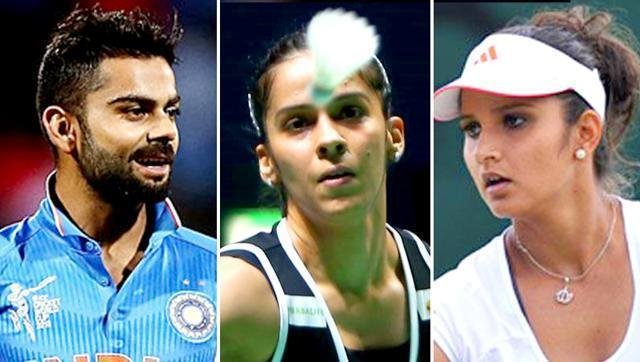 Tennis star Sania Mirza, Indian star batsman Virat Kohli and top-seeded badminton player Saina Nehwal were the top names in the pack of over 50 Indians in Forbes’ inaugural list of top “promising young leaders and game changers” under the age of 30 in Asia.

The Forbes ‘30 under 30 Asia’ list includes 300 “young and driven entrepreneurs and game-changers” from countries including India, Indonesia, China, Hong Kong, Singapore, Japan, Pakistan, Vietnam and Australia who are contributing to their industries in a significant way.

As many as 56 Indians feature in the list with 27-year old Kohli, Mirza and Nehwal and 26-year old actress Shraddha Kapoor leading the pack.

“At the top of India’s cricket culture is batting prince Kohli, who led India to clean sweep in their Twenty 20 series against Australia in January,” Forbes said of Kohli, who was named among India’s highest earning celebrities in 2015 at USD 11.3 million.

Forbes said from the moment 29-year old Mirza turned pro at age 16 in 2003, she has been the “most successful female Indian tennis player ever” and one of the highest paid and highest profile athletes in the country.

She is currently the world’s number one female doubles tennis player with partner Martina Hingis.

Describing 25-year old Nehwal as a “role model” and “Indian badminton queen”, Forbes said the number one ranked women’s singles player in the world is one of 24 top sportspersons from around the world standing for election for the International Olympic Committee’s Athletics Commission during the Rio Games this August.

The entertainment and sports category also includes 27-year old Arunima Sinha, who is the first female and first Indian amputee to climb Mt Everest in 2013 and 28-year old Chaitanya Tamhane who is the writer and director of the critically acclaimed movie ‘Court’.

Forbes said Chaayos, which also sells chai in disposable kettles via an app, has received at least USD 5.3 million in venture capital and is expected to end 2014-15 with revenues of about USD 1.5 million.

Forbes said he is a “serial entrepreneur with a passion for putting technology to use”.

“She defied the odds first by breaking into a male-dominated profession as a woman and again by starting the company in 2013 after a bout with cancer,” Forbes said.