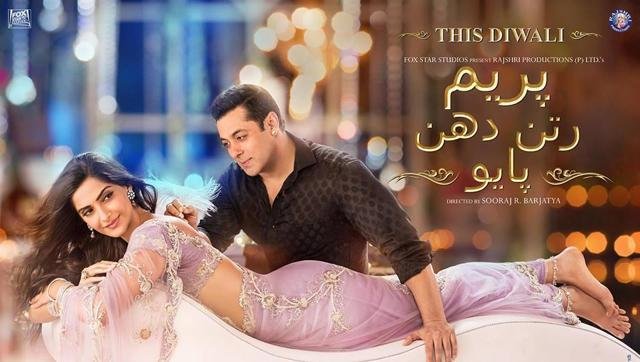 It has to be a grand affair in Bollywood if it has anything to do with either Salman Khan or Rajshri Productions. Interestingly, both have collaborated on the mega film of the year Prem Ratan Dhan Payo, which is scheduled to hit the screens on November 12, 2015.
After teasing fans with a poster where he romances Sonam Kapoor, Salman Khan shared the first trailer of Prem Ratan Dhan Payo on Thursday evening.
A look at it and you’ll find all the quintessential Rajshri elements in the trailer. Hill-tops palaces, royal chandeliers and even horse-driven carts make a comeback with the two-minute-8-second video. The last shot in the trailer, nonetheless, is likely to garner much more interest. We see a bearded Salman Khan (unlike the chocolate boy look he dons throughout the video otherwise) and that promises some twist to the sweet-boy-loves-wonderful-family story.

Prem Ratan Dhan Payo marks the Dabangg star’s return to Sooraj Barjatya’s camp after a gap of 16 years. Salman is rumoured to play a double role in the family drama. The film, which releases this Diwali, also stars Anupam Kher, Neil Nitin Mukesh and Swara Bhaskar.