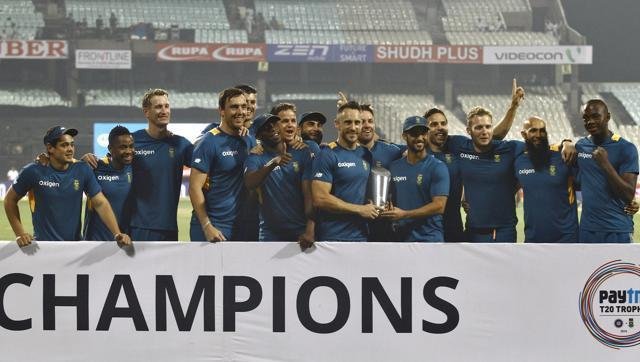 Disappointing around 25,000 spectators who had turned up despite the match being a dead rubber, the third and final Twenty20 International (T20I) between India and South Africa was called off without a ball being bowled due to rain and a soggy outfield at the Eden Gardens in Kolkata on Thursday.

The conditions at the famed cricket ground deteriorated after the city was lashed by showers in the afternoon, and after three hourly inspections, the surface was deemed unfit for play. South Africa thus won the three-match series 2-0, having triumphed in relative ease at Dharamsala and Cuttack. The two teams will now move to Kanpur for the first of the five-game One Day International (ODI) series on Sunday, October 11.

Umpires Anil Chaudhary and Vineet Kulkarni carried out the inspections at 7.30 pm, 8.30 pm and 9.30 pm, as the groundsmen made a desperate attempt to make play possible by deploying the super sopper and traditional equipment of bucket and brooms.

Around 1 pm, the skies opened up and it rained for around 30 minutes. The regional Met office in Alipore estimated the rainfall at 14.2 mm, moderate by any standards.

However, the showers were enough to keep the major part of the outfield wet for hours, calling into question the feasibility of the coliseum hosting the T20 World Cup in April next year, when the city experiences late afternoon storms known as Norwesters, which are accompanied by rain.

A look back reveals that the Indian Premier League match between Kolkata Knight Riders and Rajasthan Royals in April — the same time of the year the big T20 event is slated to be held — was called off due to incessant rain without even a ball being bowled. A couple of Ranji matches also were affected by the elements over the last couple of years.

For long, the Cricket Association of Bengal (CAB) has faced flak for the poor underground drainage system that fails to clear the accumulated water after a spell of showers. Every time, the CAB mandarins have promised action, but the situation has remained the same. Moreover, on Thursday, astonishingly, there was much delay in putting on the covers when the rains started.

And for quite some time, only the pitch, the bowlers run-up and the practice wickets were covered.

The situation, in fact, was so testing that even former Indian skipper Sourav Ganguly, facing his first litmus test as a cricket administrator, was seen venturing into the ground soon after the rains barefoot with his trousers rolled up and instructing the groundsmen on ways to get rid of the water on the playing surface.

Ganguly, who seems to have taken up his job as administrator with the same intent and passion with which he played the game, surely would not have bargained for such a start to his new innings of increased responsibility after the death of CAB’s long time president Jagmohan Dalmiya.

In fact, a week from now, Ganguly is all set to succeed Dalmiya as the organisation’s president at its special general meeting.