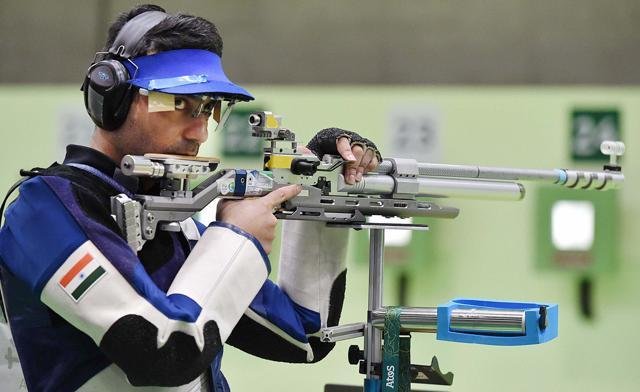 Star Indian shooter Abhinav Bindra’s quest for a second Olympics medal ended in heartbreak as he missed a medal by a whisker in a tense shoot-off in the men’s 10m air rifle event on the third day of competitions at the Rio Games in Rio de Janeiro on Monday..

Bindra, the country’s lone individual Olympic gold medallist, lost the shoot-off against Ukrainian Serhiy Kulish after both were tied for third place at 163.8 points after 16 shots.

Bindra, who was playing in his fifth and final Olympics, was deprived of a fairytale ending of his glorious career as he was the fifth shooter to be eliminated in the race for the podium. He could at least have bagged a bronze had he won the shoot-off.

Bindra scored a fantastic 10.7 in his 11th shot to jump to second spot but moved back to third after the third elimination round.

Two mediocre shots took him to fourth spot after the fourth elimination round but he bounced back in the next round with scores of 10.6 and 10.2.

But that was not enough for Bindra to stay clear in the top three as he was tied at third spot with Ukrainian Kulish at 163.8 points.

Despite a strong backing of Indian supporters cheering him, Bindra just could not make it count in the shoot-off as he was beaten by his opponent and with it ended his dreams of becoming a double Olympic medallist and join wrestler Sushil Kumar.

Earlier in the day, Bindra had qualified for the finals at seventh spot while London Olympics bronze-medallist Gagan Narang missed out after finishing at a lowly 23rd position.

Bindra had scored 625.7 to book a berth in the finals. This is the only event Bindra is competing in the ongoing Olympics.