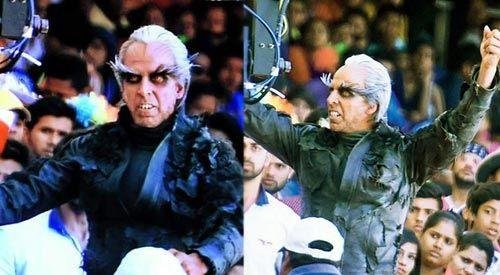 Bollywood superstar Akshay Kumar will soon be essaying the role of a villain in Robot 2.0. The actor is almost unrecognisable in the new pictures that were leaked.

Akshay Kumar’s pictures in his villainous avatar are bound to shock his fans, as Akshay is seen sporting long eye bushes, grey hair and a feathered leather jacket. According to reports, Akshay Kumar’s character in Robot 2.0 is of Dr Richard, a scientist, who turns into a crow after a freak accident during an experiment.

The film is a sequel to south megastar Rajinikanth’s hit film Robot (Enthiran).

Though Akshay Kumar has starred in several South film remakes, this is the first time that the action superstar will be seen playing a mainstream role in a Tamil film, where he will be seen at logger heads with Rajinikanth in high-octane action scenes.

The film also stars Amy Jackson and is slated to release in 2017.