Refugees give up on Cambodia and return to Iran 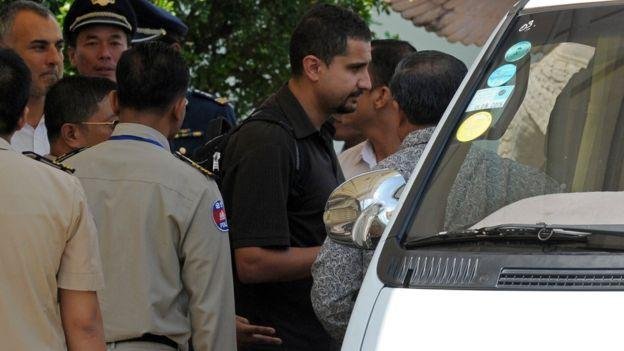 Two Iranian refugees who were transferred to Cambodia under a A$55m ($41m; £29m) deal with Australia have returned to Iran voluntarily.

A spokesman for Australian Immigration Minister Peter Dutton confirmed the husband and wife had left Cambodia.

Just two of the five refugees transferred by Australia to the Southeast Asian country now remain.

Australia has promised to give Cambodia A$40m in aid and A$15m in resettlement costs to take in its rejected refugees.

This will be paid regardless of the number of people who settle there.

The Australian government maintains a policy where asylum seekers who arrive by boat are sent to processing centres in offshore locations, including the Pacific nation of Nauru and Manus Island in Papua New Guinea.

Those found to be genuine refugees are not allowed to settle in Australia and are instead sent to another country.

The Iranian couple were part of the first group of four who agreed to go from Nauru to Cambodia in May 2015.

A Rohingya man who was part of this group returned to Myanmar in October 2015 because he was homesick.

One Iranian man from the group remains in Cambodia, along with a fifth refugee who was transferred there late last year.

Mr Dutton’s spokesperson said in a statement on Tuesday: “The Government remains committed to supporting the Government of Cambodia to implement settlement arrangements in Cambodia and encourages refugees temporarily in Nauru to explore this settlement option.

“The Government holds firm on our policy that you if you arrive by boat then you can either return to your country of origin or be resettled in a third country.”

“It stands as the symbol for how this government has completely failed in negotiating any third country resettlement options which are credible,” he said.

Papua New Guinea Prime Minister Peter O’Neill warned last week that his country did not have the resources to resettle the refugees and asylum seekers at the Manus Island detention centre.