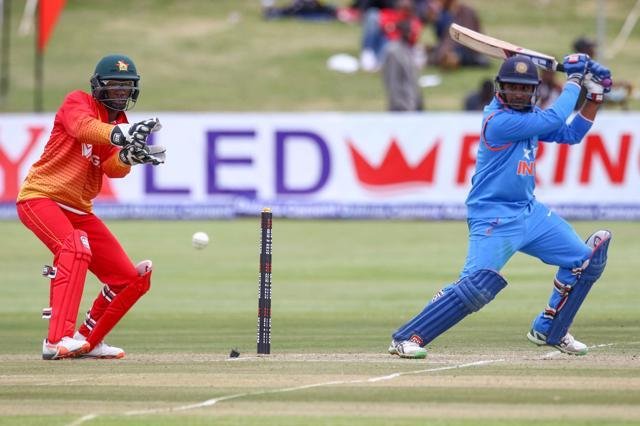 A clinical India put in another fine all-round show to beat Zimbabwe by eight wickets in the second ODI in Harare on Monday, clinching the three-match ODI series with an unassailable 2-0 lead.

It was a dominant performance yet again from the new-look Indian side whose bowlers first skittled the hosts for a lowly 126 in 34.3 overs and the batsmen hardly broke a sweat to get past the target in only 26.5 overs.

If India manage a ‘whitewash’ by winning the third ODI on Wednesday, then it would be a hat-trick of series wins for the Indian teams, maintaining a clean slate in the African nation after their victories in 2013 and 2015.

If young leg-spinner Yuzvendra Chahal (3/25) broke the backbone of the Zimbabwe middle-order, it was Ambati Rayudu, with 41 off 44 balls, who finished the game with a flourish.

With the target hardly posing any challenge, KL Rahul, the debutant centurion from the previous match, hit 33 and added 58 runs in company of Karun Nair (39 off 68 balls) for the opening stand. The Rayudu-Nair pair added 67 runs for the second wicket.

Nair, on his part, got some much-needed confidence with some runs under his belt but the manner in which he played was more about self preservation on a slightly tricky track.

When Nair was finally gone trying to sweep a straight delivery from Graeme Cremer, India needed only two runs which Manish Pandey (4 not out) completed with a boundary.

But it was Rayudu, who hit a flurry of boundaries — seven in all to finish the match with 23.1 overs to spare.

With the ball darting around a bit, the Indian batsmen were cautious and Nair for one was lucky to get a reprieve when he edged one off Tendai Chatara only to find that the bowler had overstepped.

He celebrated his charmed life with a down the ground hit off the very next ball. Nair also drove and pulled Chatara for a couple of boundaries to settle down into a good rhythm.

Rahul looked solid for at least another half-century but he dragged one from Chamu Chibhabha onto his stumps. He had four boundaries in his 50-ball knock.

Rayudu, who was unusually subdued during his half-century in the first game, started with a couple of boundaries off Chatara followed by a couple of fours each off Elton Chigumbura and Chibhabha.

When Rayudu came into bat, Nair was on 22 but was on even keel with his junior partner by the time they reached the mid-30s score.

In the end, it was another lopsided contest that went India’s way with skipper Mahendra Singh Dhoni not needing to even wear his leg guards for the second time in a row.