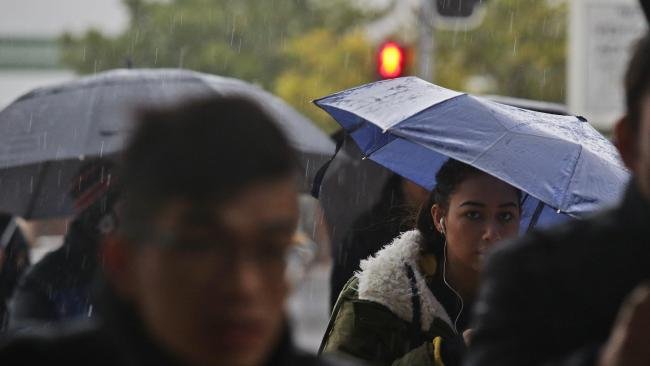 IF YOU thought the commute to work was horrid this morning, you ain’t seen nothing yet.

The afternoon peak will be a wash out across the east coast with rain likely until the weekend.

Sydney will be the hardest hit on Wednesday with almost 100mm of rain expected before the day is through, an increase on the previous forecast which had said only 70mm would fall.

Commuters in Melbourne, Brisbane and Canberra should also grab a brolly with downpours expected as the end of the working day nears.

The Bureau of Meteorology (BoM) said two low pressure systems hanging off the coast were to blame for a wet Wednesday in NSW.

“For Sydney, we’re expecting between 40-90mm of rain on the costal fringe and 25-30mm a bit further inland, such as Richmond.

“The heavy rain could well be in time for the commute home.”

The Bureau has issued flood warnings in NSW for the Macintyre, Bogan and Lachlan rivers.

Originally, the BoM had only been predicting rainfall in Sydney of between 25-70mm but as the direction of the low pressure system firmed the agency upped its rainfall forecast for the city.
Other parts of NSW won’t escape the rain. A second low pressure system off the state’s north coast could bring “pretty reasonable rainfall” of between 30mm and 70mm today, said Ms Barr.

Showers will also reach into southern parts of the state while Canberrans can expect up to 20mm of rain today.

The worst of the rain is likely to fall on Wednesday evening in Sydney but the city is going to be soggy for the rest of the week with the mercury only getting to a chilly 15-16C until Friday.

Melbourne will be even cooler, with temperatures only as high as 13C for the next few days, and the potential for showers up until the end of the week.

Brisbane commuters will have a wet trip home but the rain will be less severe than Sydney, coupled with highs of 22C.

Adelaide will be cloudy on Wednesday with a high of 16C while Perth will be blue skies and 17C.