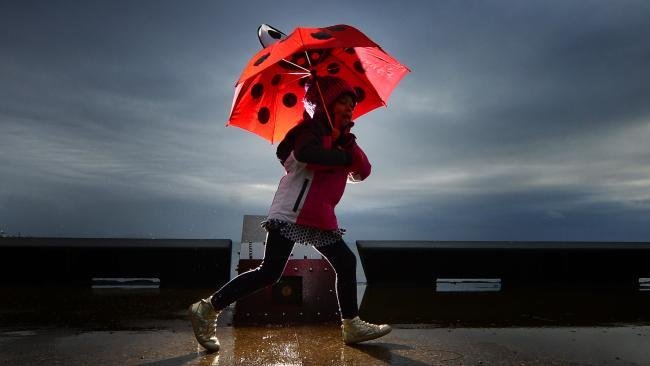 DON’T expect the rain to ease any time soon.

Prepare to put up with miserable drizzle for the remainder of today and tomorrow.

The rain won’t batter us too much but the Bureau of Meteorology said we should stay away from the beach.

“There will be large and powerful surf conditions,” duty forecaster Andrew Haigh said.

“The total wave height will be the most pertinent thing and waves will reach four to five metres during the day and won’t drop until later this evening.

“We expect they’ll return tomorrow and will reach the three or four metre mark.”

Blistering winds will reach 40km/h in the city on Thursday and could gust up to 55km/h on the east coast.

Mr Haigh said they’ll ease in the afternoon to about 35km/h.

Weather caused chaos in Victoria overnight and some areas in Gippsland copped about 200mm of rain in two days.

A 62-year-old man drove into floodwaters in Mossiface, near Bairnsdale, about 10pm Wednesday and had to be rescued.

He climbed onto the roof of his car but lost his footing, according to the Herald Sun.

Water had reached his neck by the time he was pulled out of the flood.

A Hamlyn Heights family told the Geelong Advertiser their home flooded for the ninth time in five years.

A major flood warning has now been issued for the Avon River and Mitchell River in Gippsland.

There are minor flood warnings issued for the Gippsland Lakes, Latrobe River and Macalister River.

Bureau of Meteorology forecaster Peter Newham said Reeves Knob in southwest Gippsland had 199mm of rain in the last 48 hours and 178mm fell in Bullumwaal in East Gippsland.

Those living in Central Victoria near Bendigo should brace themselves today for heavy rain but it’s not expected to cause chaos.

There’s a 90 per cent chance of rain in Melbourne on Thursday and wind gusts will hit 20km/h.

Melburnians can expect a sunny Saturday, but they shouldn’t get used to it — the rain will be back on Sunday and will continue into next week.

Sydneysiders can expect rain to return on Friday and will be consistent in the city all day, but it will clear for the weekend. And the good news — sunshine will lather the city on Monday with a top of 22C predicted.