Q&A: Why Is North Korea’s Hydrogen Bomb Test Such A Big Deal? 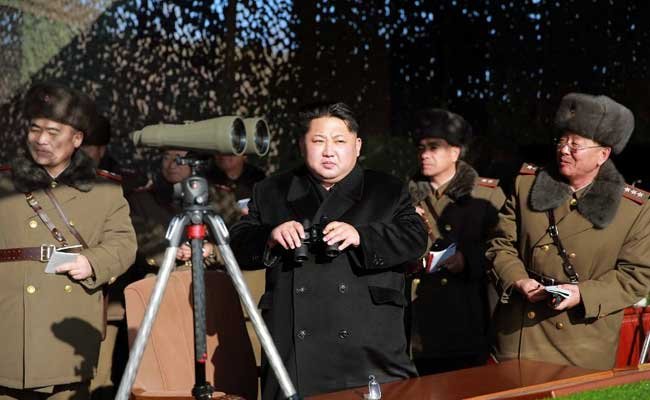 North Korea’s claim Wednesday that it had tested a hydrogen bomb alarmed Pyongyang’s Asian neighbors — and the rest of the world. We take a look at what’s behind this new North Korean claim.

Is this a big deal? We already knew they had nukes, right?

It’s a big deal because a hydrogen, or thermonuclear, bomb is much, much more powerful.

Here’s how Kim Du-yeon of the Carnegie Endowment for International Peace explains it:

It’s basically a difference in the technical process by which an explosion is obtained and in the explosive power (measured in yield). An atomic bomb uses fission and an H-bomb uses fusion.  An H-bomb (thermonuclear bomb) has an exponentially greater yield (thousands of times more powerful). It includes an atomic bomb inside its core that acts as a trigger.

Was this a surprise?

Not really. North Korea had hinted that this might be coming. In December, Kim Jong Un said his country was “a powerful nuclear weapons state ready to detonate self-reliant A-bomb and H-bomb to reliably defend its sovereignty and the dignity of the nation.” And before that, the North Korean ambassador to London had said in a speech that North Korea had weapons that were “ten times as powerful” as the nuclear devices it had previously detonated.

It sounds like the end is nigh. Is it really?

Hold on there. There’s still a considerable degree of skepticism about whether this really was a hydrogen bomb that was tested today. Jeffrey Lewis, a nuclear expert at the Middlebury Institute of International Studies, says a few words of caution are in order.

Here’s what he wrote on 38 North after Kim’s claim in December.

Building a staged thermonuclear weapon – one in which the radiation from a fission primary compresses a secondary stage of thermonuclear fuel – seems to be a bit of a stretch for the North Koreans. That is the sort of device one normally thinks about when someone says “H-bomb.” Thermonuclear weapons are tricky; making one work requires a bit of test experience. While the North Koreans finally conducted an unambiguously successful nuclear test in 2013, the 2006 and 2009 tests were less so.

South Korean lawmakers on the parliamentary intelligence committee told local reporters that the supposed hydrogen bomb that North Korea tested Wednesday had a yield of about 6 kilotons – making it about the same size as North Korea’s 2013 atomic test and a much smaller explosion than usually associated with hydrogen.

It’s Kim Jong Un’s birthday on Friday — probably his 33rd, although it could be his 32nd, such is the paucity of our knowledge about the “Great Successor” — so the launch could be an early gift for him. The leaders’ birthdays are always celebrated with a lot of fanfare in North Korea, although this is more true of Kim Il Sung, the founding president and the current leader’s grandfather, and of Kim Jong Il, the second in the dynasty.

More likely this is all about preparing for the much-awaited Seventh Congress of the Korean Workers’ Party in May this year, the first in 36 years.

As Toshimitsu Shigemura, a North Korea specialist at Waseda University in Tokyo, puts it:  “Kim Jong Un needs great results before the party congress in May. His father didn’t test a hydrogen bomb but now he can say that he has. That’s a very great result for him.”

So what happens now?

Regardless of whether the explosion was atomic or thermonuclear, it was a brazen provocation and a clear defiance of international treaties. So get ready for lots of international condemnation and some stern words at the United Nations. Already North Korea’s neighbors – South Korea, Japan and China – have sternly criticized the test, and the the United States is getting ready to do so, once it’s confirmed. The U.N. Security Council is set to hold an emergency meeting.

The question is: will the Security Council be able to pass a resolution with teeth?

The Security Council has adopted four major resolutions since North Korea’s first nuclear test in 2006 – one after each of the 2006, 2009 and 2013 tests, and another after a satellite launch in December 2012. All have imposed sanctions on North Korea and sought to both stop it from getting the equipment it needs to develop its nuclear weapons program and to convince it to give up the pursuit of nuclear capability. Clearly, none of these have had much, if any, impact.

Will this time be different?

Well, it really depends how mad China is. In 2013, China – North Korea’s closest ally and a veto-wielding permanent member of the council – was so angry with Pyongyang that it did support a resolution that expanded the sanctions regime, notably by making it more difficult for North Korea to transfer money.

But as mad as Beijing gets, it still has its eye on the bigger picture: it doesn’t want North Korea to collapse and send millions of hungry refugees over China’s north-eastern border, and nor does it want the American troops currently in South Korea up on that border. So China’s primary interest is stability. But don’t expect Xi Jinping to be at the Congress in May.