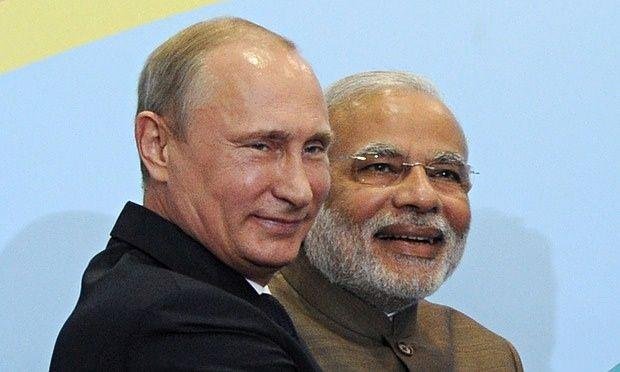 MOSCOW: Prime Minister Narendra Modi was on Wednesday night hosted by Russian President Vladimir Putin for a private tete-a-tete at Kremlin during which the two leaders touched upon issues of mutual interest for both countries.

Modi and Putin will hold 16th India-Russia annual summit talks on Thursday at the Kremlin following which the two sides are expected to sign a number of pacts to expand cooperation in a number of key areas including defence, nuclear energy, hydrocarbons and trade.

The talks between the two countries, bound by “special and privileged strategic ties”, have been taking place alternately in Moscow and New Delhi since 2000.

In the nuclear energy sector, India is expected to offer a site in Andhra Pradesh to set up units five and six of Kudankulam nuclear power plant.

The new plants will be in sync with broad principles of ‘Make in India’ initiative and a decision in this regard is likely to be finalised tomorrow.

It is expected that both countries will seal a number of defence deals as well.

Last week, India’s defence ministry’s top acquisition council had cleared the purchase of Russian S-400 Triumf air defence missile systems at an estimated cost of Rs 40,000 crore and there may be an announcement of the deal tomorrow besides a few others.

Besides bilateral issues, Modi and Putin are likely to deliberate on a number of global issues having political dimensions including the situation in Syria and ways to tackle terrorism.

It will be Modi’s second summit with Putin who had travelled to New last year for the 15th India-Russia Summit.

- Advertisement -
Share
Facebook
Twitter
Pinterest
WhatsApp
Previous articleGoogle Is Trying To Kill Passwords. But What Should Replace Them?
Next article“Life is an enjoyable journey in the company of someone you love…” – Dilip Kumar
- Advertisement -